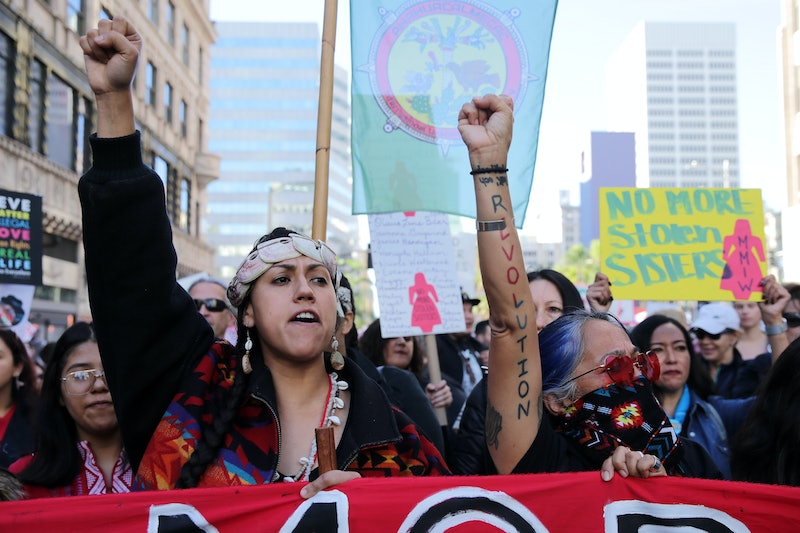 In this op-ed, writer Aria Bryan, who has White Earth and Standing Rock heritage, explains how the constant dehumanization of Native Americans sets the stage for violence to happen, like the epidemic of missing and murdered Indigenous women.

For every missing and murdered Indigenous woman — of which there are far too many — there are thousands more who are tokenized and mocked. Dehumanization begins from the bottom up, and it begins when people treat entire communities as nothing more than mascots or savages. It’s these transgressions that serve as the foundation for violent crimes against Native people.

The refusal to acknowledge Native Americans as people is nothing new. The moment that white European settlers convinced themselves they discovered this country centuries ago, they also established different classes of human beings. Colonist John Smith believed it was his right to compel Native Americans to work so that he and his companions could live off of their labor.

Today, every sports fan wearing a T-shirt emblazoned with a huge red face reinforces that dehumanization. Every “nava-hoe” costume worn in a fraternity basement on Halloween reinforces it. Every dream catcher sold at Urban Outfitters, every headdress worn at Coachella, and every team with the name “Indians” or “Chiefs” or “Redskins” reinforces it.

These may seem like harmless offenses, but they’re actually cogs in a constantly churning machine that fuels Native erasure.Native Americans already struggle with visibility, as we only make up 1.3% of the U.S. population. When our identity is whittled down to a night at a football game or a day of dress-up, a distinction is silently made that we are lesser people. The dehumanization of Native Americans occurs so frequently that nobody blinks when Party City sets up its cowboys & Indians section each October. And as this dehumanization is normalized, we as Indigenous people become voiceless, merely seen as a joke, and certainly never heard.

This erasure has contributed to the egregious acts of violence against our community. Murder is the third leading cause of death among Native American women; one in three Native women have been raped or experienced an attempted rape; and 84% of Native women have experienced physical, sexual, or psychological violence in their lifetime.

Pursuing legal justice in these cases is complex. While tribal courts have the authority to handle crimes that occur on a reservation, more serious crimes fall under the jurisdiction of the federal government. Yet, when sexual assaults against Native American women are reported to the police, only 13% result in arrest. The National Crime Center found that of the 5,712 Indigenous women and girls reported missing in 2016, only 116 were logged in the Justice Department’s federal missing persons database — that’s just 2%.

Last month, Sens. Jon Tester (D-MT), Lisa Murkowski (R-AK), and Catherine Cortez Masto (D-NV) proposed a bill, the Not Invisible Act, that attempts to address the long-standing abuse and neglect of Indigenous women across the country. But the Not Invisible Act, which is deemed progressive, is quite literally the least that the government can do. The legislation proposes the establishment of an advisory committee made up of tribal, federal, and local representatives who would collaborate on potential plans of action. After a maximum of 18 months, that committee would make recommendations to both the Department of the Interior and the Justice Department on how to combat the long list of human rights violations that Indigenous women endure. There’s no outlined strategy, no proposed budget, no promise of reducing these disproportionately high rates of assault and murder — just recommendations.

At this point, proposing the creation of a committee that aims to collaborate to solve this epidemic is nowhere near enough. Think back to the 5,712 women who vanished in 2016 alone. Think about how long this issue has persisted. Despite all that Indigenous women have withstood, think about how many more lives still stand to be lost in 18 months. The federal government needs to prioritize the repeated slaying of Indigenous women by offering more than an early stage, budgetless proposal.

What disturbs me just as much as the murders of Indigenous women is the lack of outrage in response to them. As people sport knock-offs of our regalia for fun, the Native American population is continuing to decrease at an unprecedented rate. To put a stop to this epidemic of missing and murdered Indigenous women, to truly face it head on, we all need to do better. Put your friends in check when they’re guilty of cultural appropriation. Stop supporting sports teams that use Native Americans as their mascots, and, above all else, put pressure on your senators and representatives to enact real, rapid change.

More like this
Iran Has Issued A Death Sentence Over Mahsa Amini Protests
By Catharina Cheung, Darshita Goyal and Maxine Harrison
Ayurvedic Principles & Family Are At The Root Of Fable & Mane
By Justine Knight
It’s About Time Black Girls’s Voices Were Heard – & 'Girlhood Unfiltered' Is The Start
By Paula Akpan
10 Thanksgiving Alternatives You Can Celebrate This Month
By Katie Mitchell
Get Even More From Bustle — Sign Up For The Newsletter