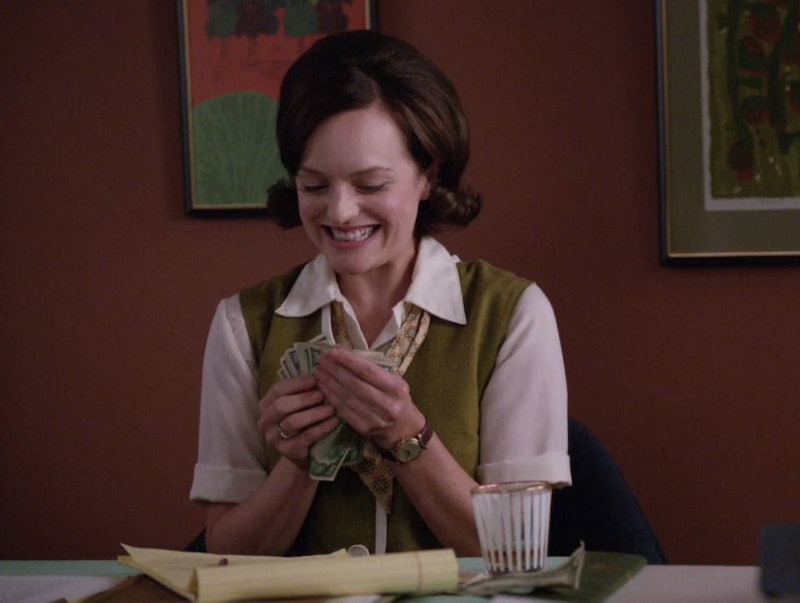 Money is a feminist issue — and yet, women are still reluctant to talk about it. According to a recent Bustle survey of more than 1,000 Millennial women, more than 50 percent of people said they never discuss personal finances with friends, even though 28 percent reported feeling stressed out about money every single day. Bustle's Get Money series gets real about what Millennial women are doing with their money, and why — because managing your finances should feel empowering, not intimidating. Today's topic: Why you need to invest part of that paycheck, according to Sallie Krawcheck, CEO and co-founder of Ellevest.

Investing is the most feminist thing you can do.

Wait, what? A feminist is defined as someone who believes in the “political, economic and social equality of women.” Sounds good, but I don’t see anything about investing here, do you?

But in a capitalist society, money is power. And men have more money — and therefore more power — than we do. There are plenty of reasons for this (I’m looking at you gender pay gap and gender unpaid labor gap); but one of them is that women don’t invest to the same extent that men do. This “gender investing gap” can cost us hundreds of thousands — for some of us, millions — of dollars over the course of our lives.

It’s life-changing. This can trap us in bad relationships, it can trap us in bad jobs… it can trap us in bad lives. And we all know women for whom this has been the case: I spoke to one woman last week whose grandmother stayed in an abusive relationship until the day she died because she couldn’t afford to leave. And I speak to multiple women each week — each and every week — who stay in cruddy jobs, with bosses who don’t “get it” and promote the guy over them. This fight isn’t over yet.

Psst! Have you checked out Ellevest, a unique digital investment platform for women? Pay no advisory fee for the first three months when you sign up today. Get started here.

The solution to this is money. As Gloria Steinem has said: “Nothing changes the gender equation more significantly than women’s economic freedom.” I’ll be more direct: we women won’t be fully equal with men until we are financially equal with men.

OK, you may say, I buy it. But why is investing the most feminist thing you can do? Haven’t we been told it’s to be more confident and ask for that raise at work? “Lean in,” “know our worth” and all that. Yes, definitely do that. But — newsflash — this isn’t fully in your control. You can ask, and I hope you get it. But there’s a reason the gender pay gap is so stubbornly hard to close, because bosses can say no.

The decision to invest is instead something that we can control. Ourselves.

In addition, I can make a pretty strong argument that it can represent an act of defiance — that the patriarchy has put up barriers to our investing. I don’t think they meant to (hmm… do I?? do I really mean that??), but the result has been the same nonetheless.

Think about it: if you wanted to build an industry that was un-welcoming to women, wouldn’t you have the proportion of financial advisors who are men be at about 86 percent? And mostly older, 50 and 60-something-year-old men at that? And wouldn’t you speak in war and sports analogies? With lots of jargon thrown in, as a barrier to entry.* And, just in case women don’t get the message, have the industry brand be a phallic symbol? In this case, a large, very anatomically explicit bull.

(*Research shows that men invest through jargon they don’t understand, while women will not, to as great a degree.)

And wouldn’t you then have a society that bathes women in platitudes about how we are awfully risk-averse, the idea being that we’re not well-suited for the manly pursuit of investing; and if we want to try, we really need more financial education? (Forget for a minute that men need more financial education as well, and that women’s risk awareness translates into better investing results for us than for men.) And if you were one of the industry’s traditional players, wouldn’t you invite us to investing seminars in which they also provide facials? (Not kidding here.) After all, how can a gal invest through clogged pores and fine lines? I mean, you can’t, right?

I’ve spent my entire career in the investing industry: I ran Merrill Lynch and Smith Barney and I now run Ellevest, a digital investment platform for women. Believe me when I tell you that investing isn’t as complicated as it’s made out to be. It can be as straightforward as:

Oh, and then talk about money and investing all the time with your friends, so we break all those outdated money taboos. Do this and count yourself as not just a feminist, but a badass #financialfeminist.

Sallie Krawcheck is the CEO and Co-Founder of Ellevest, an innovative digital investment platform for women. She is also the author of ' Own It: The Power of Women at Work.'