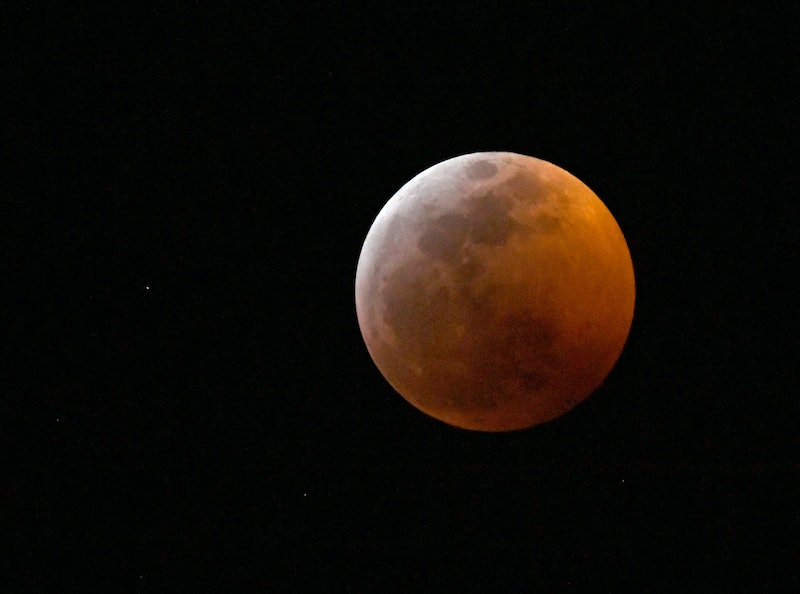 Even if you missed the lunar eclipse that happened over the weekend (a.k.a the Super Blood Wolf Moon, which is a wonderful name and sounds like it's straight out of Twilight), you've probably seen the landslide of coverage on the event all over the news and social media. It was a pretty big deal, after all: the next total lunar eclipse won't be until May 2021, not to mention it was a spectacular sight to behold. What you may not have heard is what actually happened up there during the eclipse: the moon was straight up struck by a meteorite.

If you're wondering how it all went down, stay tuned. While millions of people all over the world stared in awe at the gorgeous, red-toned eclipse on Monday, some super-observant viewers noticed a small flash on their screens while watching the event online. A few redditors even predicted that it was a meteor strike before it was proven, and they were right on the money. Gizmodo reports that Jose Madiedo confirmed the outer-space activity on Twitter, even uploading a photograph that shows exactly where the meteorite hit the moon during the eclipse. What's even cooler? This is the first time an impact like a meteorite was captured during a lunar eclipse — a step in history took place before many of our eyes.

Scientists have a system in place to track and analyze events like this, and it's called the Moon Impacts Detection and Analysis System (MIDAS). "We are running this project to identify flashes produced by the impact of meteoroids on the surface of the Moon," Madiedo describes on the system's research page. "For this purpose we are employing small telescopes and high-sensitivity CCD video cameras," he continues. I don't know what you're thinking, but all of this sounds pretty cool to me. Since the inception of MIDAS, the team has monitored every single lunar eclipse that has taken place--this past Monday was the first time they actually saw a meteorite strike during one.

Gizmodo reports that the MIDAS team typically uses four of their advanced telescopes to monitor the activity of the moon, but during this lunar eclipse they used eight (it took a ton of work and set-up to install the devices, but it seems like they made a great move). The team doesn't have a definitive answer yet, but they suspect that the impact's most likely culprit was "likely a tiny asteroid, had a mass around 22 pounds." Seeing the object strike during the eclipse was no doubt an amazing moment for the team of scientists and researchers, but also pretty cool to think about for all of us as well.

Research on lunar impacts is used not only to help scientists better understand the rates and statistics of the outer-space activities, but also to grasp the subsequent rates that such objects could enter through the Earth's atmosphere. If you're like me, imagining meteorites striking on the planet immediately makes you think of Superman touching down in Kansas--but it's a big world out there. For now, we can marvel at what goes on in the galaxies beyond.