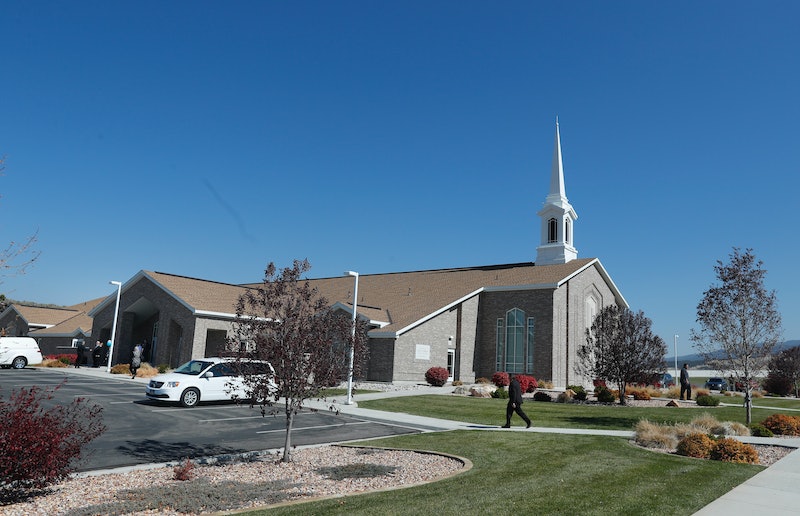 The Church of Jesus Christ of Latter-day Saints announced Thursday that it's updating two rules that have been used to ostracize gay members. According to the new policy, the Mormon Church will now let children of LGBTQ parents be baptized and blessed. Leaders will also no longer consider gay marriage to be an example of "apostasy," or the effectual abandonment of Mormonism.

"We want to reduce the hate and contention so common today," the church's governing body said in a Thursday press release. "We are optimistic that a majority of people — whatever their beliefs and orientations — long for better understanding and less contentious communications. That is surely our desire, and we seek the help of our members and others to attain it."

In 2015, Mormon leaders began excluding most LGBTQ families from participating in blessings and baptisms, the latter of which is considered by the church to be essential for getting into heaven. That policy was treated by the church's president as a "revelation," or an incontestable message from God. Many Mormons are now surprised at this sudden reversal just a few years later, according to The Washington Post.

A few LGBTQ media outlets responded to the news on social media on Thursday, including Gay Star News, which called the new policy "huge news for LGBTI Mormons." PinkNews reacted with a more measured question: "Progress?"

The original policy let LGBTQ parents baptize their kids only if they obtained explicit permission from the church governing body, according to Out magazine. Children were allowed to get baptized once they turned 18, but only if they moved to a new residence and formally rejected the practice of people of the same gender living together, per The Post.

The policy had enormous repercussions within the Mormon community. Around 1,500 people are estimated to have left the church in protest. Religion professor Taylor Petrey told The Post that "it sent a shock wave through the church."

Analysts have also said that the number of suicides among queer Mormon youths rose in the aftermath of the policy. Suicide rates in Utah have skyrocketed in recent years, increasing 46.5 percent from 1999 to 2018, according to the Center for Disease Control and Prevention. It's currently the leading cause of death for those between the ages of 10 and 17 in the state, per The Salt Lake Tribune, and some analysts have suggested that the anti-LGBTQ practices of the Latter-day Saints are partially to blame.

So, it's possible these policy updates could have a positive effect in the opposite direction. "The very positive policies announced this morning should help affected families," Thursday's press release stated.

The other major change to the church's policy announced on Thursday was that its handbook for leaders will no longer categorize gay marriage as apostasy.

"While we still consider such a marriage to be a serious transgression, it will not be treated as apostasy for purposes of Church discipline," the press release noted. "Instead, the immoral conduct in heterosexual or homosexual relationships will be treated in the same way," it continued, seemingly referring to sex outside of marriage.

The press release notes that the policy updates went into effect immediately and will be given to leaders of the church around the world.

More like this
Buckingham Palace Shuts Down Rumour About King Charles III's Coronation
By Sophie McEvoy and Sam Ramsden
Romance Authors Are Mobilizing For Reproductive Rights
By Natalia Perez-Gonzalez
New Coins Unveiled As King Charles III's Reign Gets Underway
By Sam Ramsden
Bustle Daily Newsletter: October 4, 2022
By Hayley Schueneman
Get Even More From Bustle — Sign Up For The Newsletter