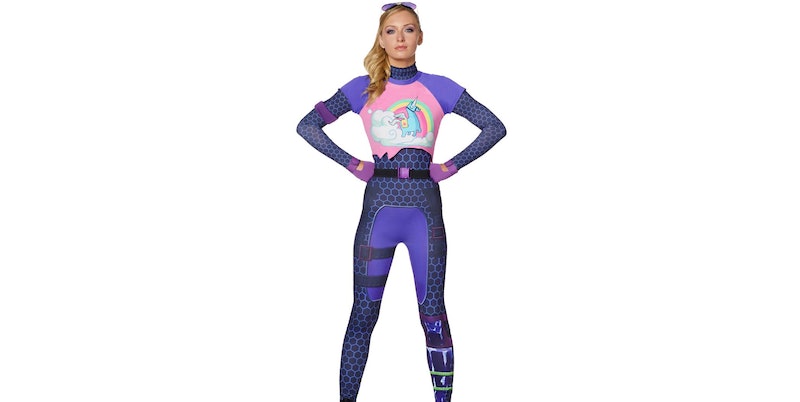 Haven't decided on a Halloween costume yet? Whether you want to make sure your idea is totally original, or you want to wear a trending costume, you're going to need to know about the most popular Halloween costumes according to Google so you can plan accordingly. While some costumes stand the test of time, others pop up each year based on whatever people are obsessed with at the moment. This year that's the Fortnite online video game, which caught those who've never heard of it by surprise (guilty). "In terms of fervor, compulsive behavior, and parental noncomprehension, the Fortnite craze has elements of Beatlemania, the opioid crisis, and the ingestion of Tide Pods," Nick Paumgarten wrote for The New Yorker about the latest gamer craze.

Because people are clearly hella obsessed with Fortnite, it's no surprise to those in the know that this is the number one trending Halloween costume on Google. This costume is most popular in Montgomery, Ala., Eureka, Calif., Steubenville, Ohio, Casper, Wyo., and McAllen, Texas. This is a pretty impressive feat considering that video games only account for 4 percent of Halloween costume searches, according to Google. Though the costumes are pretty boss, and there are a lot of options, if you want your costume to be 100-percent original, then you're going to want to avoid this one (if you've even heard of it at all). On the other hand, if you want to trick out a trend, the hottest Halloween costumes of 2018 are going to be your jam.

"With Frightgeist, we went on a hunt to find the most popular Halloween costumes of 2018," Google News Initiative said in its trend report. "Pulling from the top 500 costume searches in the United States, Frightgeist used Google Trends to tell people what costumes were trending around them and help them find a costume that was sure to turn heads." The top 10 most popular costumes this year include:

You can also see the most popular Halloween-costume rankings by state as Fortnite is not number one across the country. In Alaska, mermaid was number one, which seems kind of odd considering trick-or-treat night tends to be pretty chilly there. In Vermont, people are choosing to go as monsters, and in Idaho and Utah, unicorns are the top pick. This also seems to be a popular choice for dressing up pets, according to pics posted to Twitter.

Because people want to travel back in time away from the dumpster fire of 2018, '80s costumes also prove to be popular in a number of states and ranked 21 nationally. The '90s didn't appear until number 66, maybe because that decade is back in a big way IRL and wearing your everyday clothes isn't really a costume. Clowns topped the national list at number 11 — perhaps because of both the movie IT and American Horror Story: Cult. Scary clowns came in at 156, though I don't know how a scary clown is different than a regular clown.

IMO, all clowns are creepy AF, and they're most def the scariest costume on the list aside from the Donald Trump costume, which is number 125. Wonder Woman came in at number 12, zombies were number 16, and dolls — probably the creepiest costume after clowns and Trump — made the list at number 19. Want to go as your favorite food? Pizza came in at number 137 and tacos were number 174. If you want to see the entire list of the top 500 most googled costumes of 2018, check out the Google Frightgeist list to get some inspo for your Oct. 31 outfit.