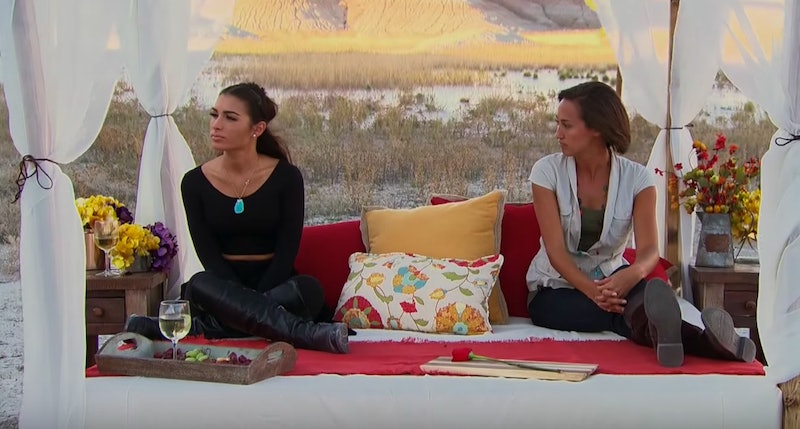 The Bachelor knows how to make finding love uncomfortable. The entire premise of the show revolves around turning love into a competition. The Bachelor has many strategies for intensifying the feeling of competition among contestants. There are group dates in which one contestant is singled out at the end of the night, cocktail parties in which contestants wait hours to see if they get to stay, and eliminations that keep everyone on their toes. Nothing however is more competitive, intense, and uncomfortable than a Bachelor two-on-one date. It's the classic, "two contestants, one date, one rose, one stays, one goes." As we head into the one for Nick's season, let's take a look back at the most insane Bachelor two-on-one dates ever.

For this list I've included dates from both The Bachelor and The Bachelorette because equal opportunity awkwardness. Audiences won't have to wait long for a Nick Viall Bachelor two-on-one date, as it's commencing Monday night. The Corinne vs. Taylor showdown promises to be so dramatic, and I can't wait. It may take the cake as the most explosive yet — even more so than Chad's from last Bachelorette season.

Before we indulge in the new two-on-one date, though, let's take a walk down awkward memory lane.

Chad Johnson and Alex Woytkiw hated each other on JoJo's season, so, naturally they were put on the two-on-one date together. It was an intense date because I seriously thought these dudes were going to wrestle one another in the woods. Chad had the height but Alex had the army training; it would have been a close fight.

In the end, JoJo chose Alex over villain Chad on this hiking date. JoJo would later break Alex's heart after making out with him on top of a horse. You can't make this stuff up people.

JoJo's season of The Bachelorette has the distinction of having not just one, but two two-on-one dates. While the second two-on-one date was less tense than the first, it did involve awkward dancing and a fan favorite being sent home. It pitted early frontrunner Derek Peth against Chase McNary. It ended with JoJo sending home Derek in a move that surprised fans. At least we forever have this gif of JoJo dancing with the two men. I could watch it on repeat forever and ever.

While not a traditional two-on-one, Ben Higgins took both Emily Ferguson and Haley Ferguson on a date in their hometown of Las Vegas. It's one thing to compete against a stranger on a two-on-one, another to compete against your identical twin. It made sense, though, that one had to go. Dating both twins was getting a little creepy and even good boy Ben Higgins couldn't pull it off.

Ben ended up choosing the more outgoing twin, Emily, but this date definitely brought the intensity. It was also super awkward. Ben didn't end up engaged to either twin, which was a good thing since they were both super entertaining on Bachelor In Paradise.

Ben had a second two-on-one date during his season, and twin Emily was also on this two-on-one. The Bachelor likes to dump the season villain in dramatic ways and this season was no different. I personally loved Olivia Caridi as a contestant. But, her label as the villain didn't bode well for her outcome however, and she was left on an island after being dumped on a two-on-one. Olivia ended up writing about the intense experience for Bustle.

Probably one of the most intense two-on-one dates in Bachelor history was on Chris Soules' season of The Bachelor. For a farmer who wanted to live a peaceful life in Iowa, his season was packed with some interesting ladies. His two-on-one pitted season villain Kelsey Poe against frequent crier Ashley I. When Ashley I. told Chris about her concerns regarding Kelsey, Chris mentioned it to Kelsey. This lead to the longest awkward silence ever recorded on the show.

The two-on-one resulted in both ladies being eliminated and stranded in the desert, as they watched Chris' helicopter fly away. Ashley I. has remained a large part of the franchise, appearing on two seasons of Bachelor In Paradise.

Here's a throwback. Brad Womack's second season as the Bachelor had a two-on-one that didn't pit enemies against each other, but put two best friends on the same date. It was an Ashley vs. Ashley situation. Ashley Hebert and Ashley Spivey had been best buds all season and were both genuinely devastated to be on a two-on-one together. While Brad ended up sending Ashley Spivey home, the ladies were more heartbroken about leaving each other.

In her exit press, Ashley Spivey told Wetpaint about how she was more in love with Ashley Herbert than the leading man. Female friendships are better than a relationship in which the dude is dating a bunch of other ladies, anyway.

Two-on-one dates tend to produce more drama than any regular group date or one-on-one date ever could. I'm looking forward to watching what a Nick Viall two-on-one date brings. Whatever happens, it should be a date for the history books.