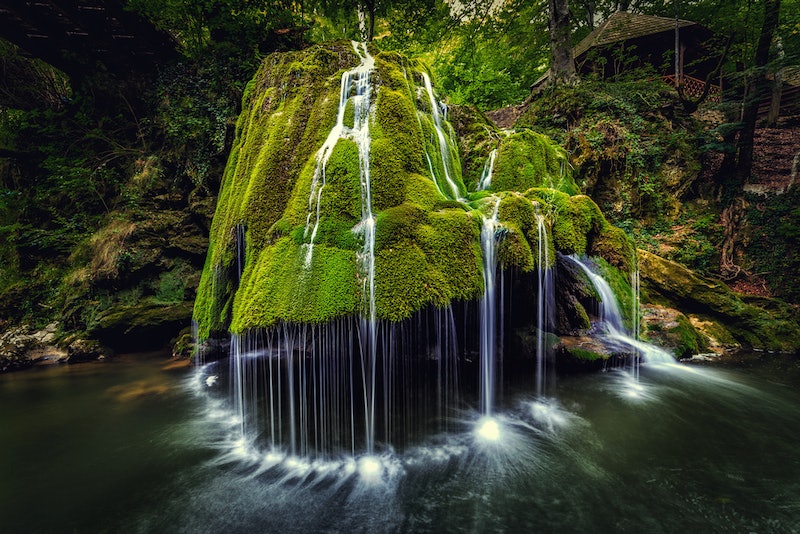 If you're anything like me, your travel bucket list is probably the length of Harry Potter And The Goblet Of Fire — aka, long. But you can't blame us: travel is addicting. Once you get a taste of it, it's difficult to not want to put the entire world on your list of places you plan to see next. That said, your list is about to get a little longer, because I'm about to tell you about the most picturesque, Instagrammable place in the world that you probably haven't ever heard of before. Enter: The Bigăr Waterfall in southwest Romania.

Known as Izvorul Bigăr, the natural wonder is situated within Caraș-Severin County, just south of Anina Mountains in Romania. Notably, the waterfall is also exactly on the 45th parallel north, which is a circle of latitude that is known as the halfway point between the North Pole and the equator. Due to how rare of a waterfall it is in appearance, it's actually considered a protected area in Romania by the International Union for Conservation of Nature. So, you know, there are a lot of cool things about it.

Also, it's literally just one of the most gorgeous things on this planet. Just take a look at it:

Tell me you're not already looking up plane tickets to Romania. You can't, because you totally are.

I mean, seriously, how has this place not entered the mainstream yet? It's one of the most unique waterfalls I've ever seen — and sure, I haven't seen a ton of waterfalls in my time, but I feel like I've seen enough to confirm that this is absolutely the prettiest.

And look, it's even beautiful in the winter time when it's completely frozen! Sure, you wouldn't want to be in the water with temperatures cold enough to freeze a waterfall, but it's still pretty to look at.

The best part of all this? Though the Bigăr Waterfall is considered one of the most unique and beautiful waterfalls in the world, it's still relatively under the radar to most travelers, especially those from the United States. So, if you take a little Euro-trip over to Romania to see this natural marvel, you might technically be considered a bit of a trendsetter amongst your friends and Instagram followers. Plus, you'll get to go to Romania, which is a beautiful country in and of itself — Brașov in the Transylvania region looks like something out of an old fairytale instead of a real life place you can go to with your human self.

So, how does one go about getting to the Bigăr Waterfall, you ask? It's actually pretty simple: If you travel to the nearest city, Timisoara, you're only about a 2 1/2 to 3 hour drive from the waterfall, depending on traffic. The waterfall happens to be located not too far from the road, so you won't have to trek more than a couple of minutes on foot in order to see it. Luckily, Timisoara has its own international airport and is served by both big airlines like United and Lufthansa, and biggest European airlines like Ryanair and Wizzair, so getting there is a breeze.

Need more convincing? I doubt it, but I personally want to look at more photos of this thing, so here you are anyway: