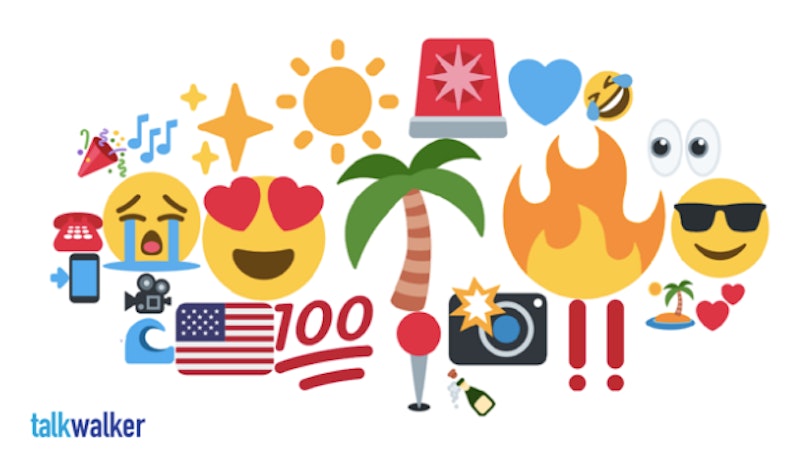 World Emoji Day aims to celebrate all things emoji — and based off of where you live, you might be seeing particular emojis more often than others when your friends flood your inbox. As it turns out, different cities have different preferences: Talkwalker, an international social media monitoring and analytics company, created an "emoji heat map" that shows the most frequently used emojis in each of 13 major cities. And the most popular emojis in your city just might remind you of something particularly special at home.

Within its analysis, Talkwalker revealed that the most universally popular emoji nationwide was the laugh-crying emoji, followed by noneother than the red heart emoji. Beyond those two classic symbols, the social media analytics company organized the rest of the emojis into a "heat map." The bigger the emoji on the given map, the more frequently it's used in that city.

In addition to the differences reflected across each of the major cities listed, you might be pleasantly surprised to see just how much in common people have, even if they live thousands of miles apart from one another. Here are the most popular emojis in 13 big cities across the United States, as analyzed by Talkwalker:

More like this
How To Turn Off TikTok Profile Views So You Can Stalk Other Accounts In Secret
By Alexis Morillo
Wait, Does Liking Someone's IG Story = Shooting Your Shot?
By Alexis Morillo
This Wordle Rival Is Taking Social Media By Storm
By Sam Ramsden
Learning To Love, Not Judge, The Lunchbox Wives Of TikTok
By Esther Zuckerman
Get Even More From Bustle — Sign Up For The Newsletter