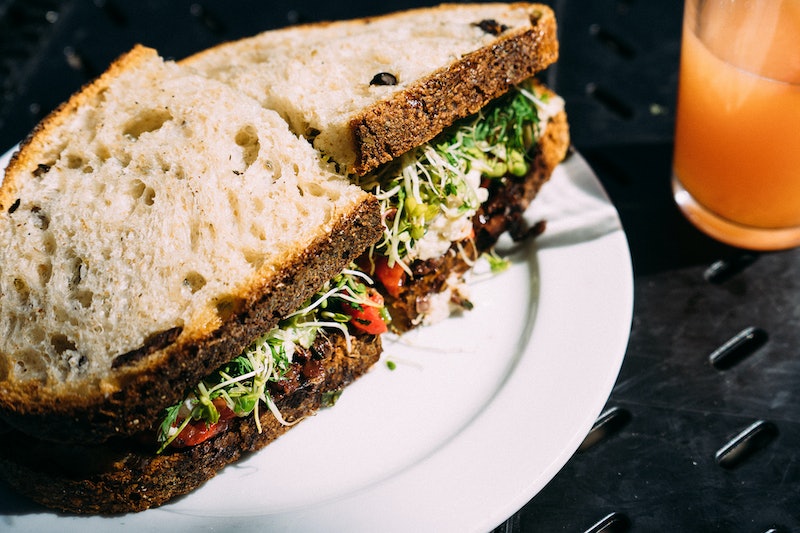 Perhaps it's the fact that summer is just around the corner and people are craving a refreshing lunch option, or that the gluten-free craze has reached its peak, but the most popular sandwich on Pinterest is no sandwich at all. It is, in point of fact, a few slices of cucumber with some meat and cheese wedged in the middle, which to a sandwich purist is nothing but a "low-carb" lie that your eyes tell our stomach; and to someone feeling a tad peckish, a bite-sized snack.

Sandwiches, the popular, portable lunchtime comestible, have become quite controversial as of late. Merriam-Webster reignited the "Is a hot dog a sandwich?" debate last year by releasing a new "expanded" definition of the foodstuff over Memorial Day weekend, including a filled "split roll" as something that would constitute a sandwich. But even going by this broadened definition, the Pinterest "sandwich" does not qualify, as it is missing one key ingredient: bread. Using two slices or more of bread is what makes a sandwich a sandwich, and not, say, a pizza or a wrap (let's not get into the whole "ice cream sandwich" debacle right now). It can take many forms, from flat pitas, to fluffy rolls, to crunchy toast. Some even count a buttered bagel is a sandwich — but on that long and diverse list of bread choices, two slippery slices of cuke do not belong. As a crunchy filling? Sure. As the "bread" substitute? Never.

Unfortunately, the idea and recipe sharing site is well on its way to passing off this monstrosity as a recipe for a tasty sandwich:

Just because meat and cheese are placed between something sturdy does not automatically make it a sandwich — unless you are confusing the verb, "to sandwich" with the actual food. However, the misnomer has not slowed the popularity of the recipe, which has been shared 800,000 time on the site, garnering it the title of "top sandwich recipe." Originally posted by Coach Calorie, the recipe calls for three things you've probably forgotten were in your fridge: slices of cucumber, cold cuts, and sliced cheese.

Amidst Pinterest's bevy of beautiful, curated images, the ill-lit photo of the "sandwich" looks neither appetizing nor filling. The internet is a strange and mysterious place, so one can only guess to what it owes its success. The second most popular sandwich is another bread-less wonder, a roll-up version of the Italian Sub from Our Paleo Life. Though the roll-up has a more appetizing image, at the end of the day it is still just deli slices, cheese, mayo and some lettuce and peppers secured with a toothpick; certainly not something special enough to warrant its current 160,000 shares and saves.

Seeking out healthy lunchtime options is a very good thing, but do not be snookered into calling these combinations of ingredients "sandwiches." Go ahead and replace that crusty baguette with something from the gourd family that's over 90 percent water, but if we let our lexicon become so lax, then what's next? Calling a lettuce wrap a sandwich? Heck no.