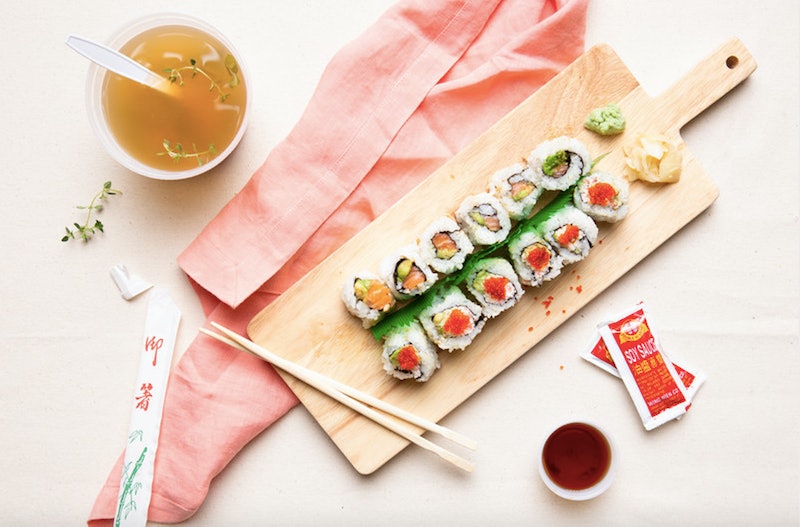 There's a holiday or a "holiday" for everything, and this June 18 marks National Sushi Day. (Or maybe International Sushi Day? It's hard to tell.) It's a day where people are reminded that they might want to get sushi for dinner after they see #NationalSushiDay pop up on social media, and... that's probably about it. But, in honor of the day, DoorDash released some takeout ordering stats that include the service's top 10 most popular sushi orders for 2019.

If you're someone who tends to order sushi — whether on DoorDash or elsewhere — you might be interested to see how your choice of sushi compares to the most popular ones overall. Or maybe you just like seeing what other people are up to and want to know what they order. Or maybe you want to see if your right about which sushi orders top the list and shake your head when you see how high California rolls rank. (Spoiler: They rank very high.)

DoorDash explains that the top three sushi orders stayed the same for 2018 and 2019, but there's also a couple new additions to this year's list. (And, yes, we're only halfway through 2019, but the data is for the year so far compared to all of 2018. Who knows, maybe this fall will bring on an eel craze.)

10. Create Your Own Roll

This is a new addition to the list for 2019 — it saw a 902% increase in orders — and it shows that menus must be adding a DIY option. (I don't know about you, but I didn't know "create your own roll" options were even a thing. What are people making??)

DoorDash explains that avocados are all the rage, and that salmon avocado rolls were not on the list last year, either.

But even more people prefer their avocado rolls without salmon. Surprise!

Rainbow rolls use several different ingredients, including the ones that form the "rainbow" on top of the roll. The inside is often filled with crab and cucumber, and the roll is topped with shrimp, avocado, and a variety of fish.

This roll, which was in the number six spot last year, is made with cream cheese, salmon, and cucumber.

Like the rainbow roll, dragon rolls involve a lot of ingredients. Avocado, cucumber, shrimp tempura, and eel are commonly included. Dragon rolls don't have raw fish, which could be one reason for their popularity.

Spicy tuna rolls do include raw fish, and it's in a spicy, sometimes crunchy mixture.

Number one on the list is the California roll, which was number one last year, too. California rolls are made of imitation crab (which is actually fish), avocado, and cucumber. Sometimes real crab is used instead of imitation, but unless the menu specifies that, don't bet on it.

As you can see, every single sushi order in the top 10 for DoorDash is a roll. This could be because people are trying to get as much bang for their buck as they can, and nigirizushi tends to be pricer. This is also shown by the fact that California rolls — which are generally pretty inexpensive — are number one, and by the inclusion of items such as dragon rolls and rainbow rolls that have a lot of food in one roll. Way to go, sushi orderers of the country. Looks like you're eating (hopefully) delicious food and being cost-effective.