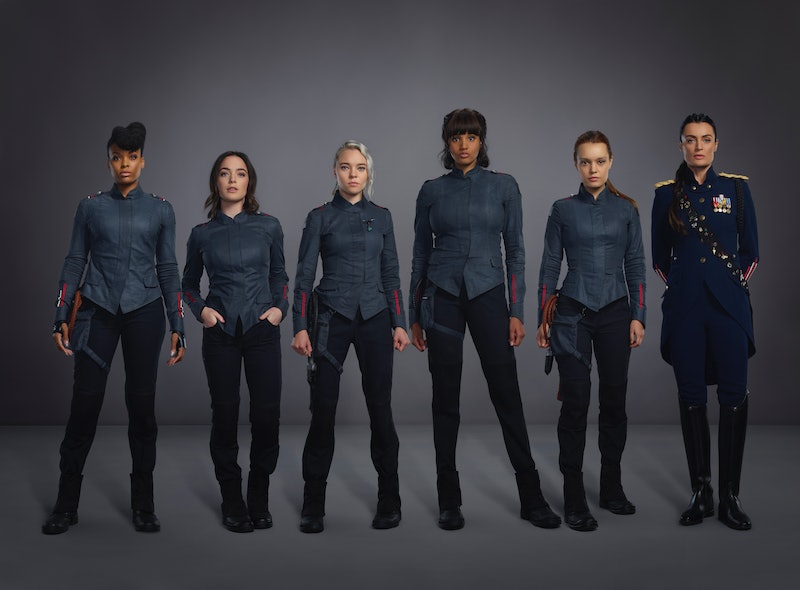 Freeform's newest show has a fascinating premise. Motherland: Fort Salem posits a world where witches work with the U.S. government to fight on behalf of the country. The Motherland: Fort Salem cast includes several such witches as they advance from basic training to combat at the titular Fort Salem. The full cast is rounded out by generals, drill sergeants, and more.

According to Den of Geek, the show follows what happens when witches of hundreds of years ago promised to fight in the army instead of being burned at the stake and the deal never expired. Now, in modern day America, magical witches are still fulfilling their end of the bargain. Creator Eliot Laurence explained to Den of Geek how the idea developed. "Originally I was thinking about a witchy Gossip Girl with some sort of secret witch school in New York City that was very fancy," Laurence said. "And it just wasn't interesting to me. Then the military thing happened and it just had that kind of electric vibe that tells you you have something cool."

He initially thought the story would work best as a book, but when publishers continued to pass, he developed the idea into the Freeform TV show. Here are all the characters fans will meet when the show premieres.

Raelle is a recruit who doesn't want to be in the army, because her mom just died in combat. Her issues with authority drive much of the drama in the series.

Before Motherland, Hickson was known for playing Meghan Orlovsky in Deadpool, Brianna Copeland in Aftermath, and Petra in Deadly Class.

On the flip side to Raelle's story, Tally's mom didn't want her to join the military service but Tally was just too curious and stubborn to listen. Will she find herself in over her head?

Motherland fans may have previously seen Sutton in Netflix's The Kissing Booth or the movie Escape Room. This new Freeform show is one of her biggest roles to date.

Abigail is even more intense about joining the military than Tally. Her witch family has long been in the army elite, and she's eager for a chance to prove herself.

Williams only has one other credit to her name, the lead role in the 2020 movie Shepard. Between that and Motherland, her 2020 is off to a big start.

The last of the witch recruits is Scylla, who is hiding secrets from even those closest to her.

Prior to taking on this role, Holm starred in many Swedish projects including The Inspector and the Sea, Jägarna, Saltön, and more. This is going to be her big introduction to American audiences.

Anacostia is a drill sergeant who is tough but also willing to share a laugh with her young recruits. She's very protective over her team.

McKinney is probably one of the best known actors in this bunch, having appeared on shows like House of Payne, Superstition, The Quad, and more.

General Sarah Alder is the highest-ranking officer and the fearless witch leader. Trust her to take no nonsense from her crew.

Viewers may recognize Renee from other roles like Madoff, Madam Secretary, Deep State, and Mercy Street.

Not much is known yet about Jacob's character Glory Moffett, but the actor herself is a bit more well known. She's previously been on Star, Superstition, and the TV movie In Broad Daylight.

According to Deadline, Gerit is a witch who enters the Fort Salem program and soon becomes a love interest for Tally.

Before this show, Bradbury had small roles on shows like Lucifer, The Man in the High Castle, Altered Carbon, Supernatural, and more.

Deadline reported that Libba Swythe is a well-to-do ruthless character on the show, with a deep grudge against Abigail. We smell a villain...