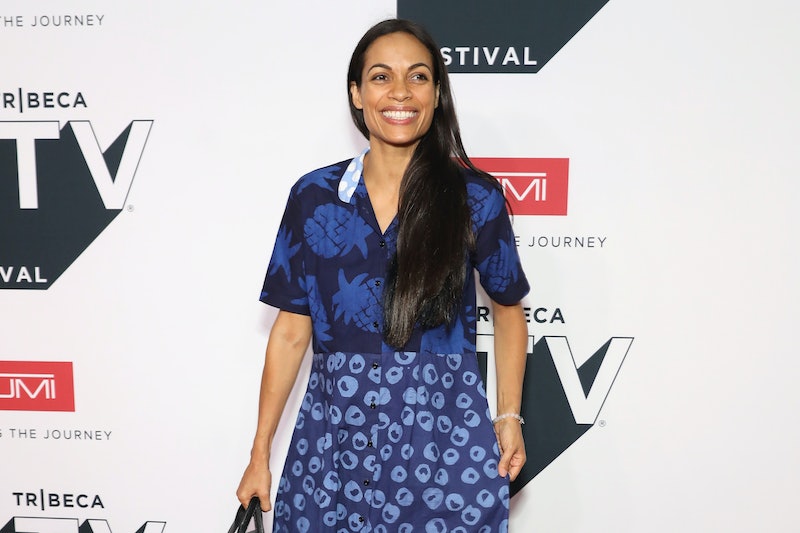 Fans of creepy thrillers will love this news. USA has announced its newest show, Briarpatch, and it already sounds so intriguing, as reported by Variety on Jan. 24. And Sam Esmail, the Mr. Robot creator, is behind the new anthology series, so you know it's bound to be good. Plus, Rosario Dawson will star in the first season, which should be all the more reason to check out the new series.

The show's first season, which will be executive produced by Esmail and Andy Greenwald, is inspired by Ross Thomas' mystery novel, also called Briarpatch. But based on the show's summary, as described by Variety, it sounds like the new series will take some liberties in its retelling of the novel.

According to the Briarpatch summary on the publisher Macmillan's website, the novel focuses on a man named Benjamin Dill, who travels back to his hometown to investigate his younger sister, Felicity's, death. But it sounds like the show is putting a woman at the heart of the story: Variety notes that the Briarpatch TV show features Dawson as Allegra Dill, who's investigating her sister's murder. Still, it sounds like both the novel and the show feature protagonists who get a lot more than they bargained for after going back to their Texas hometowns.

If some of the premise sounds a little familiar to you, it looks like Briarpatch may have some themes in common with one of 2018's best thrillers, too. The summary calls Sharp Objects to mind, with the protagonists' return to their hometowns and their families' involvement in murder cases. Hopefully, Allegra Dill won't be as troubled as Camille Preaker, but there do seem to be some common themes between the two series.

And while it's hard to imagine a character with a backstory as intriguing (and as sad) as Camille's, it sounds like Briarpatch will have its own brand of darkness. Here's a snippet from the Macmillan book summary:

"Unwilling to let local law enforcement handle the investigation, Dill arrives in town that night to begin his dogged search for his sister's killer. What he finds is no surprise to him as he begins to unravel town secrets, because Benjamin Dill is never surprised at what awful things people will do."

A small town with plenty of secrets to hide? Sign me up!

Briarpatch doesn't have a premiere date yet, but the new series is definitely happening: The Hollywood Reporter notes that USA has already ordered the show to series. So once it does debut on on the network, fans can settle in knowing there are plenty more episodes to come, at least in the first season. (Dawson's involvement with Briarpatch was first announced last year, but this is the first news that USA has ordered the show to series.)

USA may not be fans' go-to network for mystery shows, but that could change with this new show. And if Briarpatch takes USA in a new direction, I wouldn't be mad about it — you can never have too many thrillers to keep you up at night.