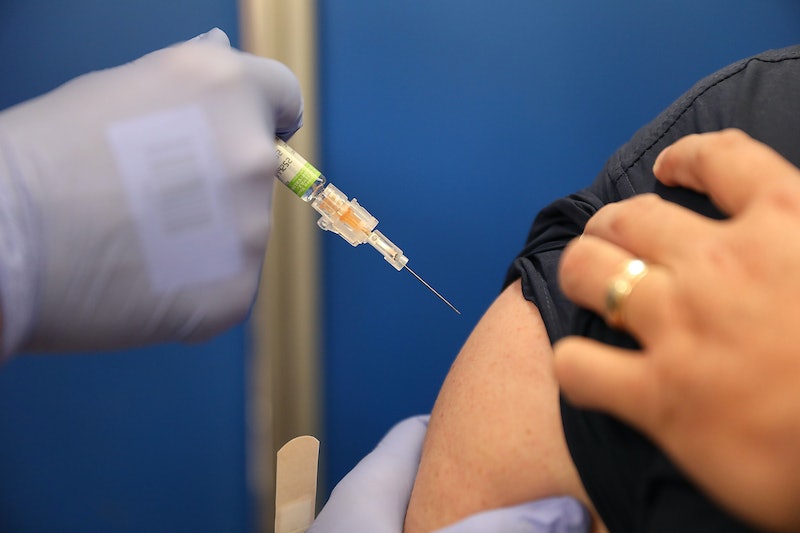 As of Tuesday, the growing mumps outbreak at Temple University has reached past triple digits, with college officials saying there are 18 confirmed cases of the disease and 87 probable cases. Per CBS, officials have also confirmed that all of these cases have occurred with people who are in some way associated with the University. But regardless of whether you live near Temple, it's worth knowing how to best prevent yourself from getting mumps, too.

According to Healthline, mumps is a contagious disease that is passed through saliva and other forms of close personal contact. The condition mostly affects the salivary glands, and makes them swell dramatically, but symptoms of the disease also include fatigue, body ache, fever, headache, and loss of appetite, per the website. Healthline notes that although mumps is rarely fatal, and usually passes after a few weeks, it can occasionally develop into meningitis or encephalitis, both of which can be fatal.

The good news is that there's a vaccine for mumps — and providing vaccinations to students and other people associated with Temple is the first step the university is taking. Per CBS, mass vaccination clinics have been set up on the Temple campus, with hopes to vaccinate thousands of people in the coming days.

You should be able to get a vaccine for mumps from your local physician; if not, they can point you in the direction of where to get one.

According to The Philadelphia Inquirer, the mumps outbreak was first reported in February, right before Temple's spring break. The publication further reports that none of the people infected with mumps have been hospitalized for the illness thus far.

If you've gotten a mumps vaccine in the past, you might want to get another one anyway, depending how long ago the last vaccination took place. According to Steven Alles, director of disease control for the Philadelphia Department of Public Health, mumps vaccines lose efficacy over time. You might consider getting a booster dose, which is an extra administration of a vaccine in addition to an earlier one.

The mumps vaccine, also known as the MMR vaccine, covers more than just mumps. It also covers measles and rubella, according to the Centers for Disease Control and Prevention (CDC). The CDC further stipulates,

And it's important to keep in mind that getting a vaccine isn't just about your own health. It's also about the health of others around you, and the community at large. The CDC warns, "Mumps outbreaks can still occur in highly vaccinated U.S. communities, particularly in close-contact settings such as schools, colleges, and camps. However, high vaccination coverage helps limit the size, duration, and spread."

If you don't have access to a general physician, you can use this government-powered vaccine locator to find the closest place where you can get the MMR vaccine, or any other relevant vaccines.