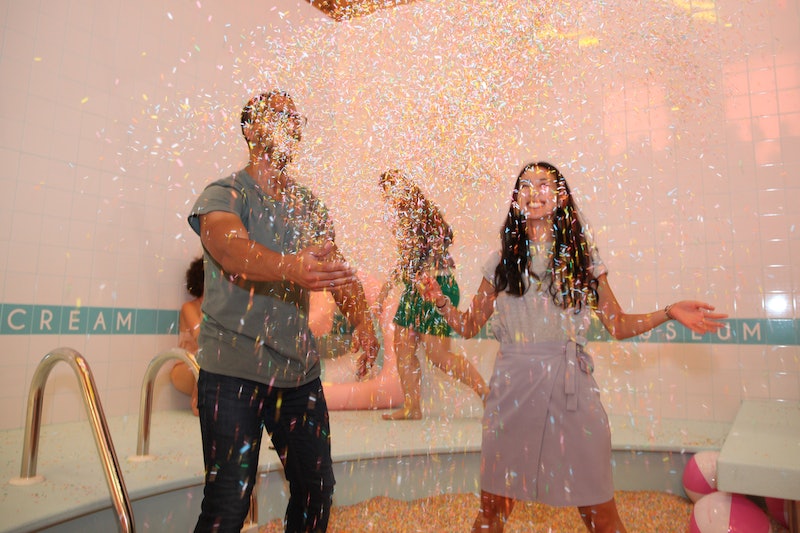 The wildly popular, made-for-Instagram Museum of Ice Cream opened its fourth location in Miami Beach, Florida, late last year, but one of its beloved attractions — a pool filled with millions of plastic sprinkles — is now facing sharp criticism for being an environmental hazard. The museum has now been fined $5000 because the plastic sprinkles are bad for the environment, according to Page Six. According to the Miami New Times, the city of Miami Beach cited the museum multiple times for "creating an environmental hazard." The issue: Patrons leave the museum with plastic sprinkles stuck to their clothes, which end up on the sidewalks and streets of Miami Beach and could eventually land in the ocean, posing a danger to marine life. Bustle has reached out to the Museum of Ice Cream for comment and will update when we hear back.

UPDATE: A spokesperson for the Museum of Ice Cream sent the below statement to Bustle.

At Museum of Ice Cream, we take our role very seriously as a public-facing entity and aim to inspire and position ourselves as a brand who greatly understands our social responsibility and cultural presence. We appreciate the feedback we have received from visitors and the local Miami community and can assure our audience that we don't take their suggestions lightly. As a result, we have taken immense precautions to ensure we are environmentally conscious and implementing sustainable efforts. At all of our MOIC locations, including Miami, we have hired multiple cleaners that are constantly sweeping around the building as well as paying extra attention to the waterway entrance. Additionally, we have already begun the process of creating a biodegradable sprinkle for our SprinklePool, that will be implemented in the near future. It is important to note that we have been consulting with top environmental specialists to learn more about how we can greater impact Miami’s sustainable efforts. Please advise that at Museum of Ice Cream Miami, the drainage systems have been layered with felt by Public Works, and our sprinkles are being collected in an area that is easily scoop-able by our sprinkle cleaners. Museum of Ice Cream is greatly invested in putting our best foot forward will continue to remind every guest to do a double shake upon leaving to ensure everyone has shaken off any sprinkles INSIDE of our walls. Our goal is to continue our sustainable efforts and amplify them to be even more efficient.

Earlier: A spokesperson for the museum told the Miami New Times, "While we acknowledge there is always more we can do to improve our sprinkle residue around the city, it is important to note that we have taken immense precautions to make sure we are a company that values sustainability and one that is proud to be environmentally conscious." The statement continued, "At Museum of Ice Cream, we are dedicated to continuous improvement with our environmental efforts and are proud to support sustainability in all of our locations."

This isn't the first time the museum has faced criticism for its plastic sprinkles. Environmentalists in San Francisco weren't impressed with the fake sprinkles they spotted on city streets after the museum opened a location there last September, according to SFGate. It's hard to explain just how many sprinkles you're dealing with unless you've visited the museum yourself. After diving into the sprinkle pool, I did my best to shake out my clothes and hair, but it's possible I could've missed some. It seems like I'm not the only one, either.

The museum is still a ton of fun, but this does put a slight damper on it being a carefree escape from reality. Knowing that you could inadvertently harm wildlife after leaving the museum is a pretty sobering thought. If you do visit the museum any time soon, perhaps approach the sprinkle pool as you might an exhibit at an art museum: look, but don't touch.