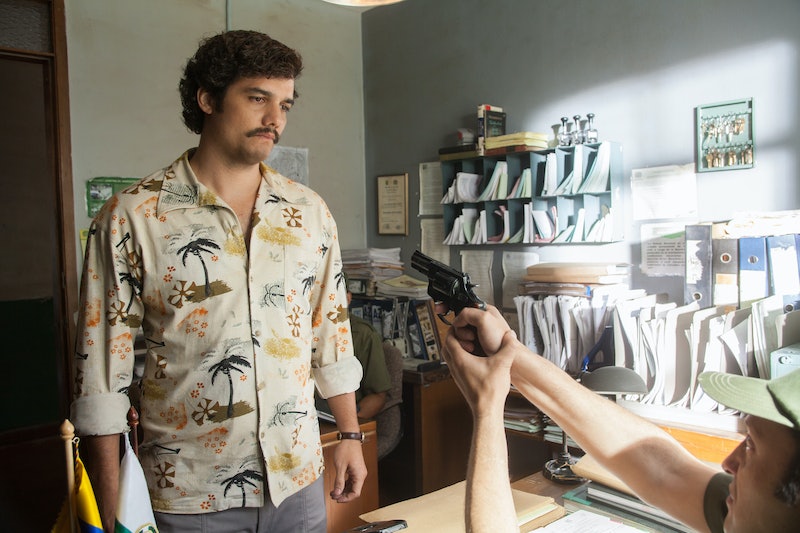 The original Narcos went on for another season and a half following the death of its primary antagonist, Pablo Escobar, but it may have never been better than when Escobar was on top of the world. Such is the problem with real life stories, as writers can't just keep a character around longer than they were around in real life simply because they want to. However, those who miss Wagner Moura's performance as Escobar from Season 1 and 2 of Narcos won't want to miss out on the Season 1 episode of Narcos: Mexico that features Escobar, who is still alive during the events of this season, and reintroduces him into the world of the global drug trade.

Escobar returns in episode five of Narcos: Mexico, having set a meeting with fellow drug lord Félix Gallardo, played by Diego Luna, who is leading the Guadalajara Cartel out of Mexico. Escobar, still leading the Medellín Cartel out of Colombia, is meeting with Gallardo to discuss the Guadalajara cartel's plans to expand their business into the distribution of cocaine. As history and the first season and a half of Narcos showed viewers, Escobar is not one to play lightly with competition in his business, and makes Gallardo an offer that he can't refuse — because if he does refuse the offer, Escobar will feed Gallardo to his pet hippopotamus. Seriously, that's what happens.

Narcos: Mexico is set in 1985, at the height of Escobar's reign. (The first season of Narcos is set in the late '70s.) Gallardo and and Escobar's conversation is tense as they lament the Americans war on drugs, and carefully size each other up. Escobar knew that Gallardo had come to town to make a deal with his competition, but with Caribbean routes closed, the kingpin has to work the upcoming Mexican dealer, even if Gallardo is also helping the Cali cartel. He doesn't like this, telling Gallardo that he — and his hippos — "don't like Mexicans," but that he'll make due for the sake of business.

It all seems rather absurd, but both of the key elements of the scene ring true when looking at the real history of Escobar. Insight Crime reports that Gallardo eventually became Escobar's primary Mexican associate, and Escobar owned not just one hippo but a lot of hippos. Escobar owned so many hippos that according to the BBC, 14 years after Escobar's death the small town of Antioquia in Colombia became overrun by hippopotamuses that can be traced back to Escobar's private zoo, which held a variety of animals that he had imported from around the world.

The scene also marks the return of Narcos main character Blackie, and marks some dread-inducing implications for Gallardo's future. Gallardo and Escobar agree to not feed the hippos that evening, and decide that in exchange, Gallardo will funnel supplies from both the Cali and Medellín cartels through Mexico in an effort to combat America's attempts to close down other drug routes in the Caribbean.

However, while Guadalajara is powerful enough to maintain and push their own supply, taking on distribution for two of the world's other biggest drug cartels proves to be more than Gallardo is ready to handle.

Anyone who watched Narcos or knows about the story of Escobar knows that things don't turn out well for him. Or most of the people who end up associated with him. While Gallardo's time running his cartel hasn't been easy, the arrival of Escobar and his involvement in Gallardo's business dealings is an omen of sorts, showing that he's at the beginning of the end of his reign as one of the most powerful people in the world. Escobar may not be long for this world either, but it's nice that Narcos: Mexico was able to give longtime Narcos fans a brief taste of the show's most notable villain.