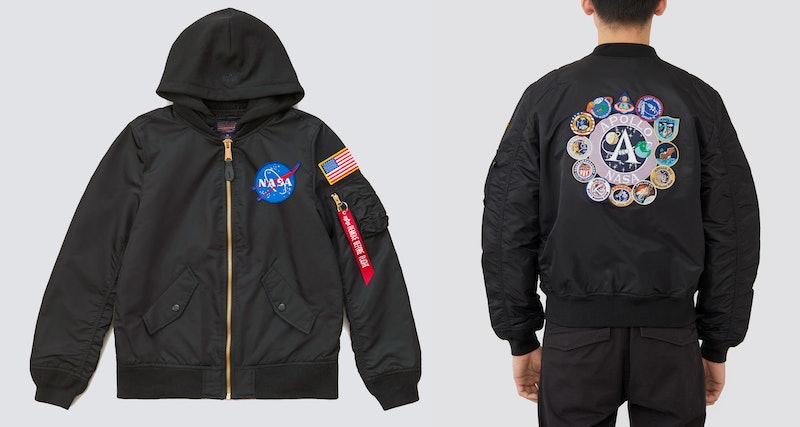 This year marks the 50-year anniversary of the moon landing, and NASA is doing something special for space lovers who want to celebrate. There is a NASA moon landing clothing collection (offered in sizes XS to 3X), letting you express your love for space with your outerwear. The collection includes a line of jackets for women, men, and kids. Each of these jackets have mission-themed jackets, letting you celebrate the race to space on your sleeves.

The capsule collection is made by Alpha Industries (offered in sizes XS to 5X) in partnership with NASA. Alpha Industries has been around since the late '50s, where the brand first launched as a contractor to the United States military. The company eventually grew into a commercial brand that sells American military style clothes. And now Alpha Industries has teamed up with NASA to bring you jackets that will make you feel like a retired astronaut.

"The NASA Apollo Jackets commemorate the 12 Apollo Missions, featuring the patch from each flight encircling the Apollo emblem patch on the back of the jacket," the brand's site reads.

The outerwear collection carries everything from bomber jackets to distressed jackets to anoraks, giving you plenty of silhouettes to choose from. Check out some of the picks below.

This jacket comes in two color options: a sleek black and a space rocket-inspired silver. The front of the jacket has an Apollo II patch where an eagle is landing on the moon, as well as a NASA logo patch and an American flag patch. There is a pocket on the sleeve that has a red tag that reads "remove before flight," making you feel like you're an actual astronaut.

The Apollo MA-1 Flight Jacket looks just like the L-2B jacket posted above, but it has the added bonus of being reversible. The jacket comes in two colors, black and red. The red jacket can be reversed inside out to make a light grey jacket. The black jacket can be reversed to create a bold red jacket. It's also a great option if you don't want to wear patches, since the patches disappear when you invert the piece.

If you prefer anoraks over bomber jackets, this blue color blocked silhouette could be right up your alley. It's a simpler piece, and features a NASA patch on the front.

This jacket has an almost leather-like appearance, thanks to Alpha Industry's three-step wash and dye process that distresses the material. The jacket caries all the same patches as the other coats in the collection, including the 12 mission patches on the back. Each jacket in the collection has the Apollo mission emblem, surrounded by individual patches from each specific mission.

From old school bomber jackets to cute anoraks to winter-ready parka coats, the NASA moon landing anniversary collection is a fun way to show off your love for space. If you have always loved learning about the universe and are a NASA history buff, treat yourself to this limited-edition collection.