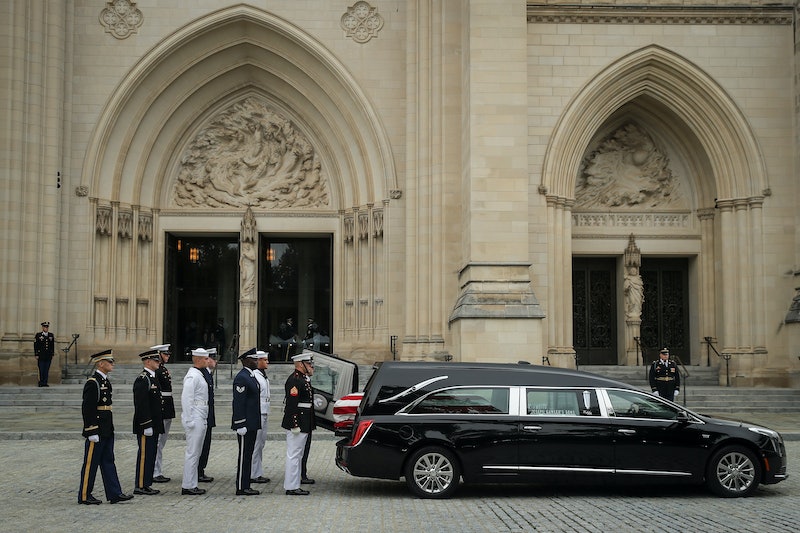 President Donald Trump has continued to attack the late John McCain, claiming earlier this week that he'd approved McCain's funeral despite his dislike for the Arizona senator. But one entity heavily involved in McCain's funeral is looking to correct the record. The Washington National Cathedral has disputed Trump's suggestion that McCain's funeral required presidential approval.

While speaking in Lima, Ohio, on Wednesday, Trump claimed that he'd had to approve details of McCain's funeral as president. As such, Trump suggested that he was ultimately responsible for having given McCain the funeral he'd wanted, despite not being invited or, as he claimed, even given a thank you.

"I gave him the kind of funeral that he wanted, which as president, I had to approve," Trump said. "I don't care about this, I didn't get 'thank you.' That's OK. We sent him on the way, but I wasn't a fan of John McCain."

According to the Washington National Cathedral, however, McCain's funeral didn't require Trump's approval. "Only a state funeral for a former president involves consultation with government officials," a spokesperson for the church tells Bustle. "No funeral at the Cathedral requires the approval of the president or any other government official."

It's unclear exactly what the president meant when he claimed he'd approved McCain having "the kind of funeral he wanted," as Trump would have had little involvement in any of the details pertaining to McCain's funeral. According to CBS News, the casket carrying McCain traveled on a plane used for VIPs and vice presidents that is technically under the president's control and which flies out of Joint Base Andrews, an Air Force facility the president has authority over.

Trump's comments about McCain have drawn frustration and ire from both Democrats and Republicans. "Mr. President, seriously stop talking about Senator McCain," Republican Rep. Dan Crenshaw tweeted Thursday. Martha McSally, the senator appointed to fill McCain's seat called her predecessor an "American hero," arguing that "everyone should give him and his family the respect, admiration, and peace they deserve" in a tweet that did not mention Trump directly.

According to Politico, McSally told reporters on Thursday that she'd spoken privately with the president regarding his continued disparaging of McCain. "I did talk to the president yesterday," she said, per the news outlet. "I wanted to make sure he understood how I felt about Sen. McCain and how Arizona felt about Sen. John McCain. And he heard me." McSally said she felt there was "a lot of disrespect going on out there all the way around."

But in an interview conducted Thursday, the president appeared to defend his repeated attacks on McCain, telling Maria Bartiromo of Fox Business Network that it wasn't him but the media that was continuing to fuel his feud with McCain. "No, I don't talk about it," Trump said when asked why he was continuing to "punch back" on someone who had died last year. "People ask me the question, I didn't bring this up. You just brought it up, you asked the question."

The president also pushed back on claims that he was spending a lot of time on the subject. "It's not a good portion of my time, it's a very small portion," he said.

McCain's family has also pushed back on the president's continued attacks with the late senator's youngest daughter, Bridget McCain, urging Trump to try and at least be mindful if he can't find it within himself to be decent or respectful. "Everyone doesn't have to agree with my dad or like him, but I do ask you to be decent and respectful," she wrote in a tweet to the president. "If you can't do those two things, be mindful. We only said goodbye to him almost 7 months ago."

She accused the president of being "a child" in a separate tweet. "Even if you were invited to my dad's funeral, you would have only wanted to be there for the credit and not for any condolences," she wrote. "Unfortunately, you could not be counted on to be courteous, as you are a child in the most important role the world knows."