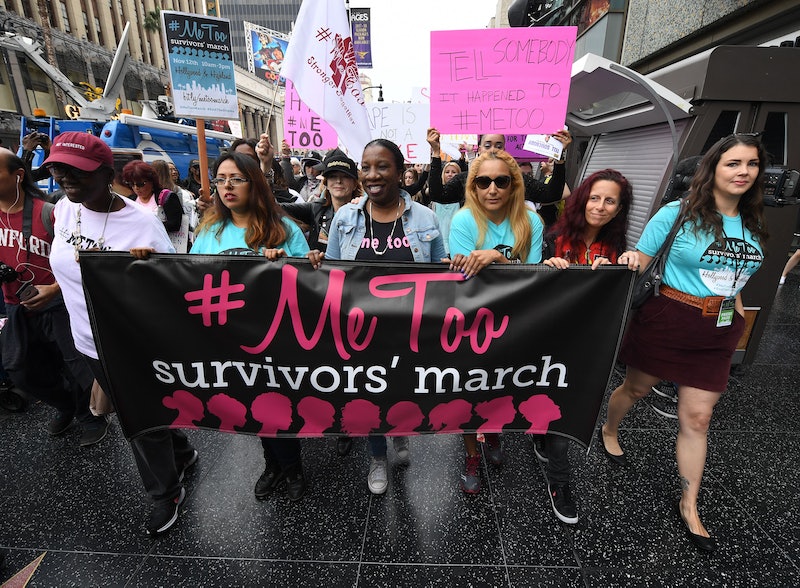 The flood of sexual misconduct allegations against film tycoon Harvey Weinstein started a global movement to hold powerful men accountable (Weinstein has denied all allegations of nonconsensual sex). But our national discussion on sexual assault is forgetting women of color, even as predatory men continue to be called out across industries and large numbers of people gather to protest sexual abuse.

By speaking out against sexual misconduct, it's true that Weinstein's accusers have inspired other women in the United States and all over the world to highlight their own experiences. But it's possible that society wouldn't have paid so much attention to these women's stories if they weren't famous. The overwhelming majority of the known Weinstein accusers are white and well-known.

This disparity became clear when Kenyan actress Lupita Nyong’o wrote about her experience with Weinstein in an op-ed for The New York Times. Weinstein denied Nyong'o's allegations of sexual misconduct and insisted in a statement that he had "a different recollection of the events." Right after that statement went public, some people suggested that Weinstein singled Nyong'o out.

For some, Weinstein's apparent singling out of Nyong'o wasn't strongly condemned by white feminists. "Look at what happened to @Lupita_Nyongo," one Twitter user pointed out. "She was the only one #Weinstein decided to call a liar. And not a single white feminist spoke up to support her the way they did with the other victims. She wasn't given the same backing." Observers, like writer Clarkisha Kent for The Root, say that white feminists need to stand with women of color and understand the intersection of race and sex.

In October, actress Jane Fonda told MSNBC's Chris Hayes that the allegations against Weinstein gained so much traction because "many of the women that were assaulted by Harvey Weinstein are famous and white and everybody knows them." Fonda added, "[Sexual abuse] has been going on a long time to black women and other women of color, and it doesn’t get out quite the same."

Research backs up Fonda's point about sexual abuse against women of color. For instance, Native American women experience some of the highest rates of sexual assault in the United States, but the widespread nature of that abuse hasn't resulted in the same kind of watershed public or cultural reckoning that the Weinstein allegations prompted. Meanwhile, about 40 percent of black women report having experienced coercive sexual advances by the time they're 18, according to the Connecticut Alliance to End Sexual Violence.

According to The Alliance, a majority of sexual abuse targeting black women goes unreported as well. The organization states that for every one black woman who reports a sexual assault, there are 15 black women who never come forward. And there's a reason for such silence. According to digital media strategist April Reign, who spoke with The Sacramento Bee, "Women of color have a disincentive to come forward because they don’t have the same support system that white women have, and it has a chilling effect."

Even when women of color come forward with reports of sexual abuse, racial stereotypes can keep them from following up. With Asian women typecast as submissive and black women as sexually promiscuous, and given the racist tropes against Native American women and Latinas, the idea of lodging a sexual harassment complaint is understandably terrifying for some women of color. For undocumented women of color, reporting sexual abuse and domestic violence can result in loss of employment or deportation. Fear of lack of support from social peers can also keep women of color from speaking out against sexual misconduct. Thus, a cycle of abuse and silence repeats itself at the expense of thousands of minority women and girls.

The intersection of racism and sexual assault is a subject Americans need to understand in order to make real progress toward ending sexual abuse in all industries and communities. These two forms of social abuse fuse to create a suffocating dynamic for women of color. For scores of black, Latinx, Asian, and Native women, there is no talking about sexual abuse without the mention of racial inequality. If we don't internalize that, our national conversation on sexual misconduct will be incomplete and, ultimately, ineffective.

Editor’s Note: This op-ed does not reflect the views of BDG Media and is part of a larger, feminist discourse on today’s political climate.