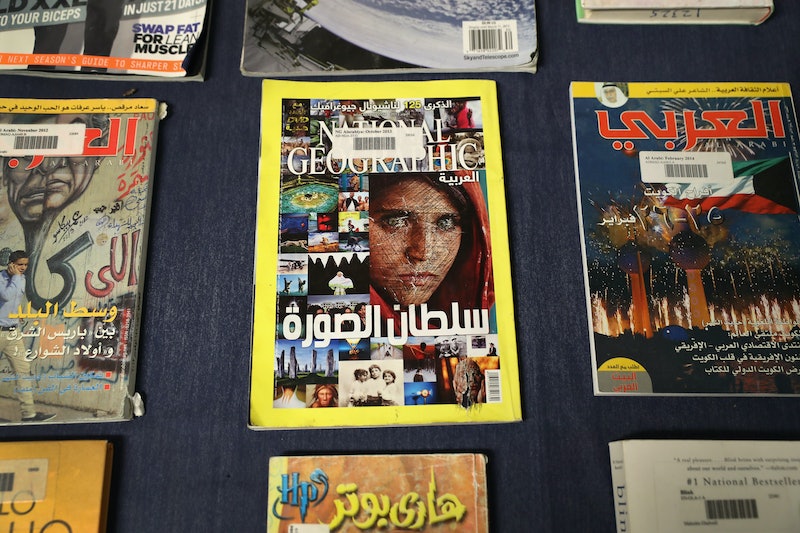 Rarely do powerful media publications openly acknowledge problematic and biased coverage, especially when it comes to the subject of race. But recently, National Geographic admitted its racist coverage of people of color in an editorial letter from its chief editor Susan Goldberg. "For decades, our coverage was racist," Goldberg wrote.

The magazine, which has covered politics, culture, economics, and much more for nearly 130 years, is set to publish an April issue on race. For the issue to be thorough and robust, Goldberg wrote that National Geographic would have to have an uncomfortable conversation with itself and reckon its with racist and colonialist coverage of people from Africa, Asia, and Latin America.

"[U]ntil the 1970s National Geographic all but ignored people of color who lived in the United States, rarely acknowledging them beyond laborers or domestic workers," she wrote. "Meanwhile it pictured 'natives' elsewhere as exotics, famously and frequently unclothed, happy hunters, noble savages—every type of cliché."

She added that the magazine had done "little to push its readers beyond the stereotypes ingrained in white American culture." In one of the more disturbing instances, Goldberg shared photos of an Australian Aboriginal man and woman from 1916, and noted that National Geographic referred to the group as "savages" at the time and peddled falsehoods about Aboriginal people with lines like, "South Australian Blackfellows: These savages rank lowest in intelligence of all human beings."

Goldberg wasn't alone in her assessment of the magazine's historical race coverage; she sought the academic insight of John Edwin Mason, who teaches the history of both photography and Africa at the University of Virginia. Mason went through nearly 130 years worth of coverage to arrive to the conclusion that National Geographic was indeed racially biased in its coverage of non-white people. In fact, it shared dangerous messages about non-white people in American society, Mason found.

In the letter, Mason said that instead of interrogating and exposing the inaccuracy of racist stereotypes, the magazine seemed to have run some baseless racial stereotypes about non-white people in its photography, like showing non-white people looking amazed by Western technology.

Mason noted that the magazine's recent coverage seemed to have improved. Certain initiatives reflected well on it, like giving the photographed the opportunity to be the photographer. He shared the example of National Geographic giving cameras to Haitians to take photos and show the world what it is like to live in Haiti in 2015. By giving Haitians the power to photo-document their own lives, National Geographic allowed everyday people the chance to tell their own stories without a foreign narrative. "The images by Haitians are really, really important," he said.

Going forward, Goldberg said that she hoped that people could go over the magazine and see that National Geographic made an effort to rectify its wrongs by having this difficult conversation. In order to make that happen, Goldberg mentioned that the insight of a "diverse group of writers, editors, and photographers" would inform such coverage.

Online, the magazine's reckoning with its own dark past received mixed reviews. For The Root, Breanna Edwards wrote that the magazine's acknowledgment was the first step — but other observers weren't thrilled about National Geographic. One Twitter user said that it was too late by pointing to how the magazine's work was frequently shared in American classrooms for years.

"National Geographic apologizing for its continued wild racism over a century late like their reportage wasn't baked into social and environmental sciences curriculums in schools across the country," the Twitter user wrote. "The damage has been done."