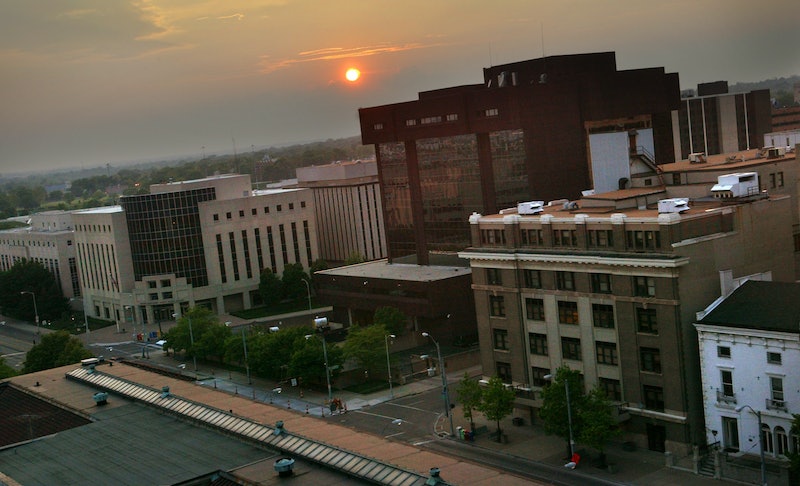 The man featured in last week's New York Times feature of a white supremacist has been fired from his job following national outrage at the paper and the article, titled "A Voice of Hate in America's Heartland." The Ohio man, Tony Hovater, 29, was presented in the feature as a regular guy — "the Nazi sympathizer next door" — save for his white supremacist views, appreciation of Hitler, and membership in the Traditionalist Workers Party, which has been deemed a hate group with ties to neo-Nazis (although the group denies such depictions).

Many accused the paper of downplaying and normalizing those views in favor of descriptions of Hovater as "polite and low-key at a time the old boundaries of accepted political activity can seem alarmingly in flux" whose "Midwestern manners would please anyone’s mother."

In the piece, he was described as a welder, but he, his wife, Maria, and her brother had all worked at 571 Grill and Draft House in a suburb of Dayton. On Wednesday, the Times reported that he, his wife, and his brother-in-law were fired from their jobs at the restaurant.

The Times did not name the restaurant in its initial story, but some found their employment information online and began to call the restaurant and leave "threatening and intimidating" messages online, according to a statement from the restaurant on Wednesday. Hovater told the Times that "they decided to can me," whereas the restaurant claims that Hovater "suggested that we release him from employment" due to the threats.

In the restaurant's statement, it said it "does not share any of these views with this person, nor was the owner aware of them prior to the publishing of this article." It went on to explain the termination of employment:

We felt it necessary to fully sever the relationship with them in hopes to protect our 20 other employees from the verbal and social media threats being made from individuals all over the country, and as far as Australia. We neither encourage nor support any forms of hate within our establishment.

Hovater and his wife will also be moving, he told The Washington Post. They can no longer afford the rent, and someone reportedly uploaded their home address to the internet.

"It’s not for the best to stay in a place that is now public information,” he told the Post. "We live alone. No one else is there to watch the house while I’m away.”

Hovater's supporters have started a fundraising campaign on far-right supportive Goyfundme.com ("goy" is a derogatory name for a person who is not Jewish, and the site reclaims it in an anti-Semitic fashion). Mainstream crowdfunding websites have decided not to host campaigns connected to the far-right or neo-Nazis. By Thursday, more than $8,000 had been raised for the couple.

After the original feature was published, The New York Times denied the accusations that it "normalized" white supremacy. "The point of the story was not to normalize anything but to describe the degree to which hate and extremism have become far more normal in American life than many of us want to think," national editor Marc Lacey responded in a column.

But many, including a vocal contingent on Twitter, detailed how the paper failed to do that. One Twitter user, @magi_jay, posted a prolific chain of posts pointing out how the Times "could have *actually* achieved" their goal to "shed light on the normalcy of racism in American society." She suggested that the paper should have challenged his ideologies and gotten Hovater to defend his position, then placed that in a broader context. "Otherwise you are just giving a racist an unchallenged platform," she wrote.

"The Times could have asked Horvater what he meant when he said 'things have gotten bad.' Or, perhaps, what he meant by 'normal people,'" @magi_jay wrote. She also criticized their lack of exploration of Traditionalist Workers Party, given that Hovater is one of the founders, and interviewed an expert from an organization like the Southern Poverty Law Center that has written that the group "is a white nationalist group that advocates for racially pure nations and communities and blames Jews for many of the world’s problems."

She also suggested that the Times used pictures of him dressed up as a member of the Traditionalist Workers Party, rather than the pictures of him "staring into the sunset, driving his car, and shopping (JUST LIKE YOU DO!)."