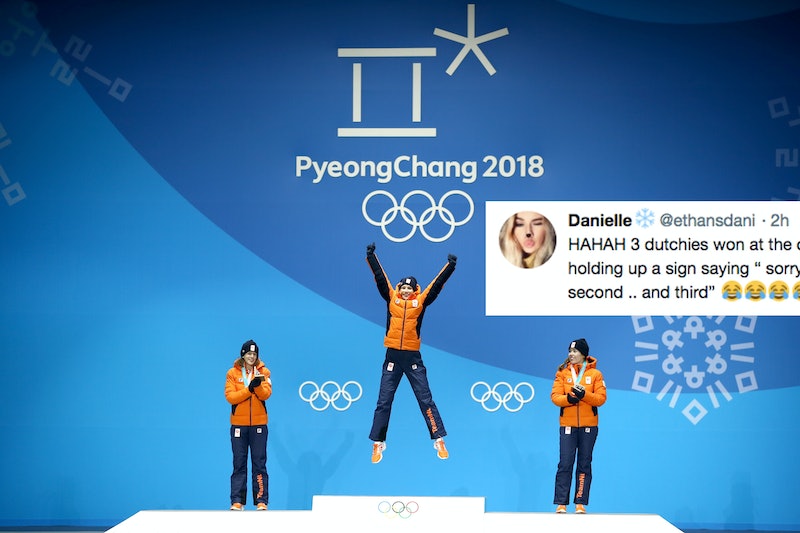 Donald Trump has long been pushing his "America First" slogan in the United States, but citizens around the world have taken notice of that phrase, too. After winning all three medals at a speed skating event during the 2018 Winter Olympics, Olympics, the Netherlands, trolled Trump by unfurling a banner poking fun at that whole "we're first" thing.

The event was the women's 3,000-meter speed skating race, a sport where the Dutch have a long history of success. This time, they won the gold, silver, and bronze medals — and then a pair of presumably Dutch women displayed their nation's flag, on which they'd written a pointed message to the U.S. president.

This isn't the first time the country has taken a public go at Trump's "America First" message. Soon after Trump's inauguration, Dutch comedian Arjen Lubach released a video inviting Trump to the Netherlands and requesting that if America must be first, then perhaps the Netherlands could be second.

This video went massively viral, spurring numerous countries around Europe and the world to produce their own "America First, _____ Second?" videos. Trump did not respond to any of the videos, and he is unlikely to respond to this new instance of Dutch trolling.

As of writing, the medal sweep in the women's 3,000 meter long track speed skating propelled the Netherlands to second in the 2018 Winter Games medal count, trailing only Norway. At the end of the first Sunday's competition, the U.S. only has two medals, whereas the Netherlands has five. That leaves the U.S. in fifth place, just nudging out the Czech Republic — which also has two medals, except theirs are silver and bronze as opposed to the gold and silver that the U.S. has so far garnered in luge and snowboarding.

The Netherlands, a country of 17 million, won 23 medals in Sochi, many of them in various speed skating events. So far, all five of their medals have come from that same sport — one in short track, four in traditional speed skating. Having such a sign prepared — one bragging of not only a victory, but a sweep — might seem arrogant or presumptuous in another case, but one can hardly fault the Dutch fans for assuming that they would continue their historic tradition of speed skating success.

Trump, on the other hand, does not seem to have devoted a significant amount of attention to the Olympics so far. He tweeted twice on the subject, both times wishing the Republic of Korea well in hosting the Games.

"Best wishes to the Republic of Korea on hosting the @Olympics! What a wonderful opportunity to show everyone that you are a truly GREAT NATION!" he wrote in the first tweet, an apparent jab at his North Korean rivals. "Congratulations to the Republic of Korea on what will be a MAGNIFICENT Winter Olympics! What the South Korean people have built is truly an inspiration!" he then posted, also on Wednesday. So far, he has not used his Twitter feed to commend either of the American medal winners or to wish the American delegation luck in their competition over the next two weeks.

Vice President Mike Pence, however, represented the U.S. delegation at the PyeongChang opening ceremony on Friday, so Team USA is not entirely without support from the White House. And as Trump has not responded well in the past to criticism, perhaps it's for the best that he is unlikely to attend the Games — and therefore unlikely to see any signs from Dutch fans excited about their speed skating medals.