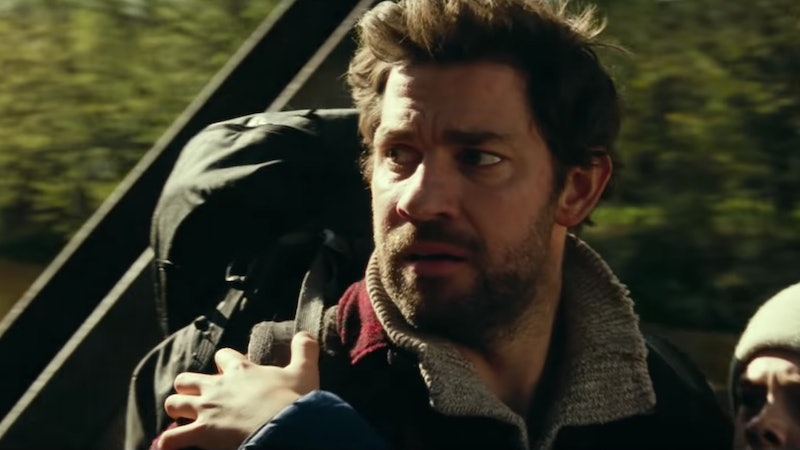 There’s no need to remain silent about this news: John Krasinski's character will return to A Quiet Place II, per a new 30-second game day spot unveiled before the Super Bowl. In the sequel to the Krasinski-directed film, the remaining members of the Abbott family — matriarch Evelyn (Emily Blunt) and her two children, Regan (Millicent Simmonds) and Marcus (Noah Jupe) — continue their fight for survival as they leave the farm and meet a slew of new mysterious survivors. While the first film featured the demise of patriarch Lee (Krasinski), it turns out that A Quiet Place II will not be entirely Krasinski-less.

Per the new teaser, it looks like A Quiet Place II will chronicle the early days of the apocalyptic society plagued by the elusive noise-sensitive creatures. In the clip, Lee approaches a police officer against the backdrop of a still-intact society and asks, “What do we got?” The officer responds, “Some kind of fire. We’ve got units headed up there now.” One of the creatures then crashes into the frame, setting off the narrative explored in the first film. The sequel will thus weave in the then and now, as Evelyn and her children confront strangers who could be as dangerous as the creature itself.

In a new behind-the-scenes featurette unveiled with the teaser on Friday, Krasinski and Blunt outlined the framework of the sequel. When the barn burns down, the Abbotts must “leave the path of safety and go into the unknown,” Krasinski says. “We answered all those questions the audience asked about since day one; especially, ‘How did this all start?’ Every step is much more treacherous.” Blunt adds, “It’s harrowing; it’s terrifying; but at the core of it, it’s a very human story.”

While A Quiet Place debuted to acclaim (and a Screen Actors Guild Award for Blunt in her role), Krasinski revealed that he was initially hesitant to create a sequel. However, the opportunity to explore the world created in the film ultimately appealed to him. “The reason I decided to go back, in the end, was this world is so rich, and it's so much fun to explore,” he told the Hollywood Reporter in October 2018. “There are so many different things to see now. Everyone else in the world is experiencing this, so I'm curious to see what that looks like from another perspective.”

A Quiet Place II arrives in theaters on March 20.