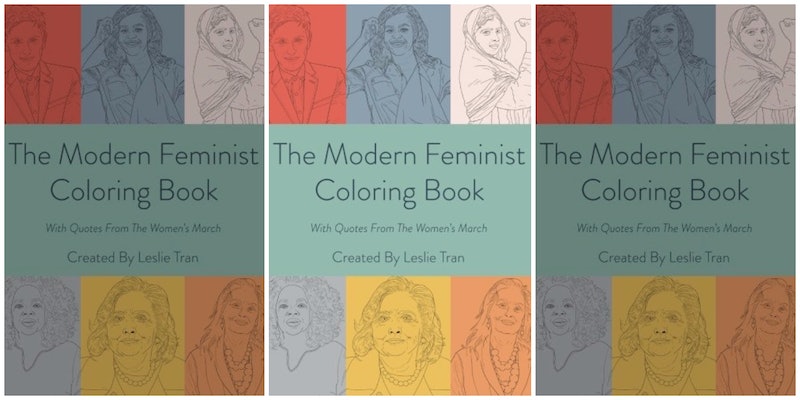 Feminists, you’ve been insanely hard at work lately — and unfortunately it looks like the work of us Trump-era feminists is only just beginning. But everyone needs to take a mental break every once in a while, and there is a new feminist coloring book (for adults, that is) that might be just what you need to kickback and relax, without losing all that girl power momentum you’ve been building. Check this out.

The Modern Feminist Coloring Book: With Quotes from the Women’s March by illustrator and storyboard artist Leslie Tran was published on February 8, and quickly became a top new release on Amazon. (I mean: feminism, quotes, and coloring — what’s not to love, amirite?) The 60-page coloring book features 23 illustrations of modern feminist figures and 30 quotes snagged directly from the picket signs of the San Francisco Women’s March, as well as several excerpts from the speeches given at the Women’s March on Washington, both held earlier this year, on January 21. The book’s featured feminists include Kamala Harris, Ruth Bader Ginsburg, Lady Gaga, Ellen Page, Oprah Winfrey, and others.

“My inspiration for the book came from taking the MUNI train back home after walking in the San Francisco Women’s March,” says Tran, the illustrator of The Modern Feminist Coloring Book. “I remember seeing hundreds of signs laid out from the entrance all the way to the ticket booth. They were funny, creative, empowering, and witty. Even on the crowded train ride home there was such a strong sense of unity in the air, it was contagious. I finished the book in two-and-a-half weeks.”

As a coloring book artist, Tran has been busy lately. During an election season and new presidential administration that has, for many, been marked by hatred, anger, ignorance, and rage-Tweets, Tran is trying to counter that negative energy with art and humor — and often, as fans of his books know, plenty of political satire too. In addition to The Modern Feminist Coloring Book, Tran has also illustrated Color Me Bernie: Join The Bernie Coloring Revolution, PokeTrump Go: The Coloring Book, The Hilla-Crimes Coloring Book: The Hilarious Crimes of Hillary Rodham Clinton!, and others.

“I published my first book around the time of the Democratic primaries, in support of Bernie,” says Tran. At the time, there were already several Bernie coloring books published, so I inked my version making it as 'nightmarishly’ hilarious as possible. Everyone [I showed the book to] was so supportive of the project telling me: ‘you have to do a Hillary and Trump one now’.”

“The novelty and platform of an adult coloring book has definitely grown in the past few years. The combination of local artists, accessible publishing, crowdfunding, social media, and conscious journalists help elevate these books that make strong statements. You don’t see too many racy and outspoken coloring books on the shelves of Barnes & Noble. Everything is patterns, mandalas, nature, and holiday. So it’s important that this art form continues to gain momentum, especially when the President is corroding democracy.”

Tran’s plans for his next two projects include supporting good causes. The first is a collaboration with Tran’s friend and co-author (on Genital World: The Coloring Book) Zerah Suhklimek, on a coloring storybook designed to teach kids about kindness — soon-to-be launched as a crowdfunding project. By Christmas of this year, the duo plans to donate at least 100 copies of the book to kids in need. The other is a LGBT heroes book, to celebrate and commemorate the hidden figures that paved the way for LGBT rights. Coloring book fans: definitely keep an eye out for both of those.

“From my first book to my seventh, my intentions have definitely shifted,” explains Tran. “I’m more into helping people these days, spreading awareness for good causes through the subjects of my books.”

Celebrating feminism is definitely a good cause. Of The Modern Feminist Coloring Book, Tran says: “I hope it gets people talking about what it means to be a modern feminist and mobilizes the Fempire to strike back against the Trumpire.”

More like this
10 Equally Romantic & Heartbreaking Books From British & Irish Authors
By Shahed Ezaydi
The Mysterious Gunther Corporation From 'Gunther’s Millions' Has Dissolved
By Brad Witter
Rachel Nickell’s Son Wants The Police To Take Accountability Over Errors
By El Hunt
Delia Cai’s Small-Town Romance Goes Beyond The Tropes
By Samantha Leach
Get Even More From Bustle — Sign Up For The Newsletter
From hair trends to relationship advice, our daily newsletter has everything you need to sound like a person who’s on TikTok, even if you aren’t.