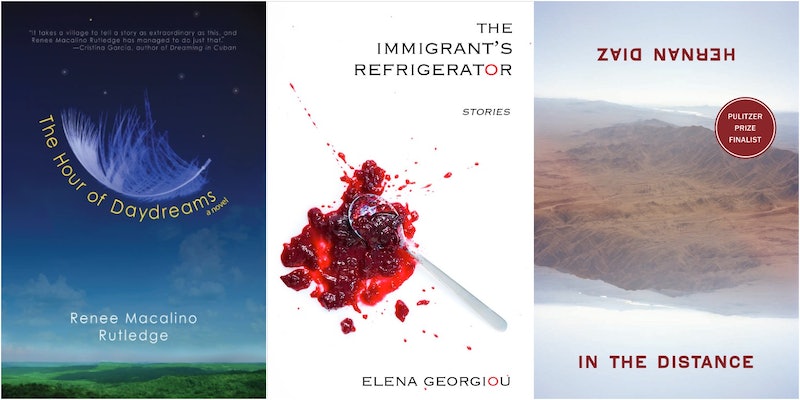 At the heart of the United States' current immigration firestorm lies the myth of the American identity, which certain factions claim to be stalwart, never-changing, never-shifting. But the finalists for a new literary award honoring immigrant writers, entitled the New American Voices prize, embody the reality that "American" is anything but static.

In an announcement earlier this week, Fall for the Book, a non-profit literary agency which hosts the annual Fall for the Book literary festival in Northern Virginia, announced the three finalists for their inaugural Institute for Immigration Research New American Voices Prize. The award, which will be presented in October, will mark the 20th anniversary of Fall for the Book's festival.

The idea for the award, which is sponsored by the Institute for Immigration Research, arose over a year ago, says Kara Oakleaf, the literary festival director. Inspired by the recent push to diversify the publishing world — which has emerged alongside increasingly vitriolic conversations regarding who has the "right" to be in this country and self-identify as American — Oakleaf says the festival's board wanted to highlight the important cultural role immigrants play and give the prize a powerful name: "New American."

"The fact is, these are American writers, whether they came to the U.S. from elsewhere or were born here to parents who immigrated," Oakleaf tells Bustle. "We wanted the name of the award to reflect that and to acknowledge that writing by immigrants is an important part of what makes up American literature, and should be included in our thinking about American literature."

Oakleaf points to the words of prize judge Helon Habila: "If America is a country of immigrants as it is often described, then the quintessential American literature would be the literature of immigration... Whenever an immigrant writes about America, be it in a poem or a novel or a play, it enlarges our understanding not only of what America is, but of what it might become.”

But the award does not simply honor writers who are immigrants; the three finalists each offer works that wade deep into the concepts of belonging, of "home" and "foreign," and of myth creation.

Elena Georgiou, a finalist for her short story collection The Immigrant's Refrigerator, says she wrote her book buoyed by a sense of urgency.

"Writing it taught me the following things: Borders change. Countries appear and disappear," Georgiou tells Bustle. "Walls go up. Walls come down. Wars begin. Wars end. These are the things that divide us. And the things that unite us."

For Renee Macalino Rutledge, a finalist for her debut novel The Hour of Daydreams, the opportunity to participate in a prize that addresses the stereotypes and the diversity in the title "immigrant" is particularly poignant.

"The award name can be broken down in so many ways. I am a new 'American voice' being a debut novelist. It could also be interpreted as 'New American' voice, but I don’t consider myself a new American. I am an immigrant, but naturalized at 19 years old, over 20 years ago," Rutledge tells Bustle. "I think that’s why the award is so important, because immigrants are very often grouped together, and the word alone can invoke a stereotypical image in someone’s mind. Books by immigrants tell a very different story."