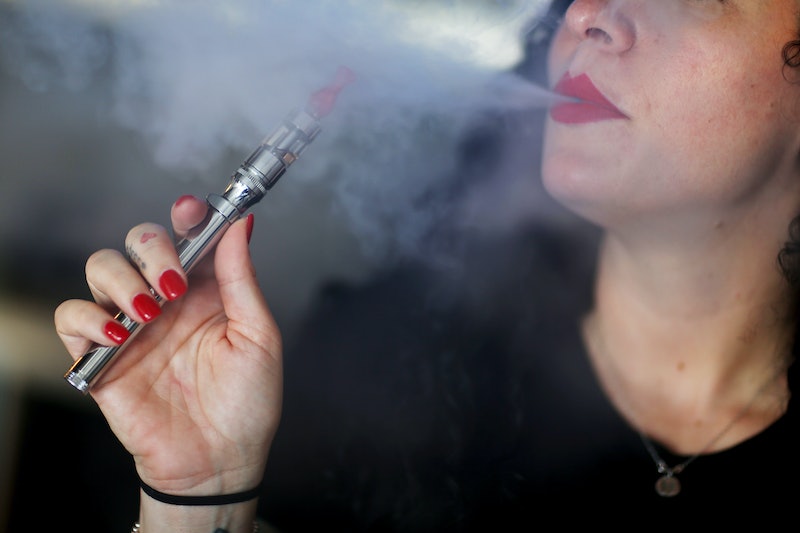 For all the criticism the Trump administration has received for moving to deregulate just about every industry, the outgoing Food and Drug Administration (FDA) chief is taking a stand against big tobacco before he leaves. Commissioner Scott Gottlieb said Wednesday that e-cigarettes would see new restrictions from the FDA, as would some cigars. Gottlieb has accused big e-cigarette brands such as Juul of marketing to children.

The new rules are still in the draft stage, but they focus mainly on controlling what is sold in stores where teenagers can go (think gas stations and grocery stores), as well as stores that have been caught selling tobacco to underage people in the past.

Flavored e-cigarettes would not be for sale in these places — and if a product were found on the shelf, it could be removed from the market entirely. Other stores that would face these regulations are those that don't use age verification software and stores that allow purchases of unlimited quantities.

Companies would also need to get any flavored tobacco products approved starting in 2021. That wouldn't apply to tobacco, mint, or menthol flavors. Similar flavor bans would apply to cigars moving forward so that young people don't replace one tobacco source with another.

"We expect these steps designed to address flavors and protect youth will dramatically limit the ability of kids to access tobacco products we know are both appealing and addicting," Gottlieb said in a statement released by the FDA on Wednesday. He called young people's use of e-cigarettes an "epidemic" and said teenagers under 18 have very little trouble buying vaping products right now.

"With these concerns in mind, today, we’re advancing our policies aimed at preventing youth access to, and appeal of, flavored e-cigarettes and cigars," Gottlieb said in the statement.

The FDA and Gottlieb have been mindful of not regulating vaping products out of existence, because they do believe that it offers potential health benefits for adult smokers looking to quit smoking traditional cigarettes.

"Our proposal reflects a very careful public health balance between closing the on-ramp for kids to become addicted to nicotine through tobacco products, while allowing for the promise of an off-ramp for adult smokers through access to potentially less harmful forms of nicotine delivery," Gottlieb said in the statement.

Gottlieb is already on his way out of the FDA — it was announced earlier in March that he would be stepping down. He has generally been seen as moving out of step with the administration by taking steps like lowering nicotine levels in cigarettes. That disconnect seemed to be acknowledged in Wednesday's press release.

"Our pledge to reduce youth use of e-cigarettes is deeply rooted and has broad support within the Trump Administration," Gottlieb's statement reads. "Nobody wants to see children becoming addicted to nicotine."

Vaping products were previously on track to be more heavily regulated by 2018, but in 2017, Gottlieb pushed some deadlines back to 2022 to give companies and the FDA more time to prepare.

"If you told me in summer 2017 there was going to be an explosion in youth use of e-cigarette products over the course of 2018, I would have made different decisions in 2017,” Gottlieb told CNBC Wednesday.

The new regulations aim to make up for it. The proposal is open for comments for 30 days and will be enforced 30 days after it is finalized.