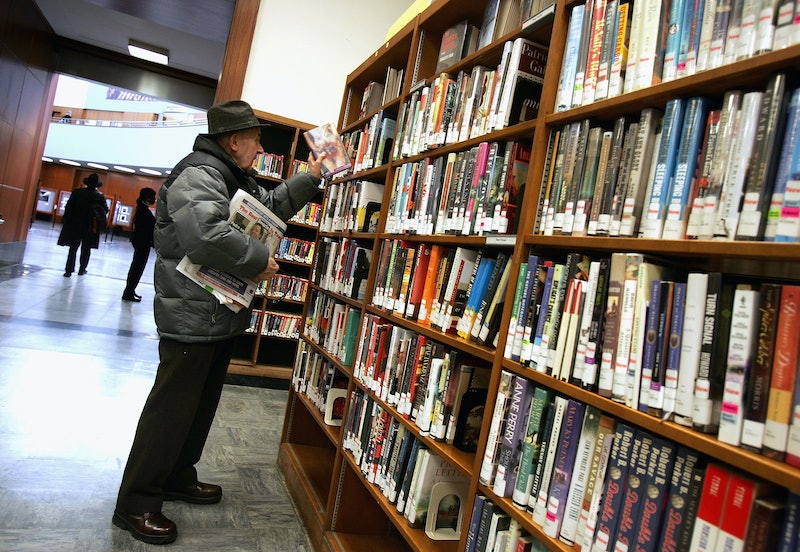 Since Donald Trump took office in December 2017, not a month has gone by that I haven't had to call my representatives to urge them to stop the newly empowered GOP from legislating irresponsibly, and Feb. 2018 has been no different. Now, according to the FY2019 budget released earlier this month, the White House is proposing serious some serious funding cuts to libraries, and this bookworm is just one of the many resistance readers ready to fight back.

For the second year in a row, the Trump administration has made it clear they do not understand how essential libraries are to the American public. Earlier this month, the White House released its proposed FY2019 budget which once again called for the elimination of the Institute for Museum and Library Services (IMLS) and the hundreds of millions of dollars the Library Services and Technology Act (LSTA) it provides libraries around the country. In addition, the new budget calls for serious cuts and, in some cases, the complete elimination of several key federal programs that help sustain libraries and their services, including the Department of Education's popular Innovative Approaches to Literacy initiative.

In a statement, American Library Association President Jim Neal explained exactly why the White House's budget proposal was so problematic.

"The administration’s FY2019 budget is out of touch with the real needs of Americans and the priorities of leaders in Congress who represent them. The president miscalculates the value of more than 120,000 libraries across America, just as he did in his FY2018 budget proposal.

“There is bipartisan support for libraries in Congress, where decision-makers know that to cut funding for libraries is to undercut opportunity for their constituents."

Neal went on to explain the many versatile programs IMLS funding makes possible, because with the proper assistance, libraries can provide their communities with so much more than free books. They can help Veterans in California find opportunities to further their education or access medical treatment, offer students in Arkansas competitive coding classes, and even assist adults in Kansas complete their GED courses and find valuable career paths. It is undeniable that libraries provide incredibly powerful resources to diverse populations all over the country, and yet, this new budget proposal threatens to limit their ability to serve American communities.

The fight isn't over yet, though.

The White House may have released its 2019 budget proposal, but it is just that: a proposal. According to the ALA, there are still plenty of meaningful opportunities where advocacy on the behalf of libraries and their programs can make a huge difference in the final budget approval. The first step: calling your representatives and letting them know where you stand.

Right now, the ALA is imploring concerned library patrons and Americans across the country to contact their Senators and Representatives about properly funding libraries and saving key grant-making agencies like IMLS. "Remind them that libraries play a vital role in our communities," one tweet urges, and that is what many concerned readers on Twitter have already promised to do.

“Withholding federal support for libraries means withholding services that foster achievement, develop the workforce and contribute to local economies," Neal explained. "ALA members will continue to highlight the value of libraries to our elected leaders in every U.S. congressional district. And we are confident that our congressional leaders will continue to protect the federal programs that invest in our communities.”

If you want to ensure American libraries get the funding they need, you can contact your Senators and Representatives, or visit the ALA Action Center and the Fund Libraries campaign page to find out how you can get involved.