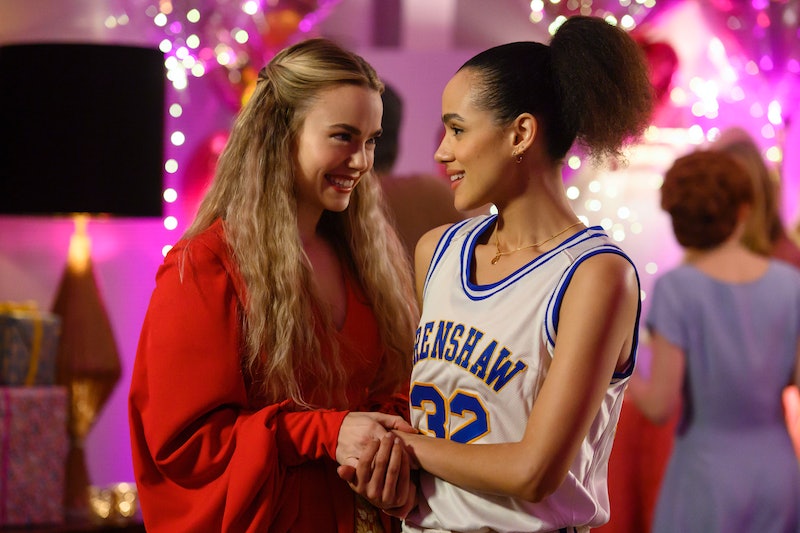 Love. It may seem small, but that four letter words packs a significant punch when it wants to. It can hit you out of nowhere, leave you just as quickly as it arrived, and it can be found in the most unexpected of places — even at an airport. The trailer for Hulu's Four Weddings and a Funeral series takes that premise and runs with it, proving that relationships can be complicated, but that doesn't make them any less worth fighting for.

Written by The Office's Mindy Kaling, the new limited series centers around a young, career-driven woman named Maya (played by Game of Thrones star Nathalie Emmanuel), who decides to leave her fast-paced life in New York behind after she receives a wedding invitation from her college schoolmate who is now living in London. So she packs her bags and heads to England in order to reunite with old friends. However, life has a funny way of throwing surprising twists and turns your way when you least expect it. For Maya, everything changes when she meets a handsome stranger in an airport, which sets off a chain of events that could forever alter her friendships — and not necessarily in a good way.

Love isn't the only thing the series will focus on, though. According to the press release provided to Bustle, the official logline goes on to describe the project, stating: "Relationships are forged and broken, political scandals exposed, London social life lampooned, love affairs ignited and doused, and of course there are four weddings… and a funeral."

Love and loss are forever intertwined, so it makes sense that the limited series intends to tackle both topics in equal measure. (Plus, it's also the title of the show, so it's kinda mandatory.)

Aside from Emmanuel, the 10-episode series also stars Zoe Boyle, Guz Khan, Sophia La Porta, Harish Patel, Nikesh Patel, John Reynolds, Rebecca Rittenhouse, and Brandon Mychal Smith. And just in case you were paying too much attention to the storyline to focus on any other details, here's how the episode scheduling is going to play out. Very similarly to other Hulu shows like The Handmaid's Tale, which typical airs a group of episodes right away upon its initial release of a new season, Four Weddings and a Funeral will debut the first four episodes beginning on Wednesday, July 31. From there, a new episode will be released on a weekly basis on the streaming platform.

Naturally, the story serves as a reimagining of the original 1994 film of the same name, however, apart from the obvious parallels that are to be expected (there will be four weddings and a funeral), Kaling wanted to throw in her own special twists to the project, telling Entertainment Weekly during a recent interview that “I wanted to take the themes and the essence of the movie and apply it through my eyes of what I would like to see that I haven’t seen yet."

Sounds like a series to die for, doesn't it?