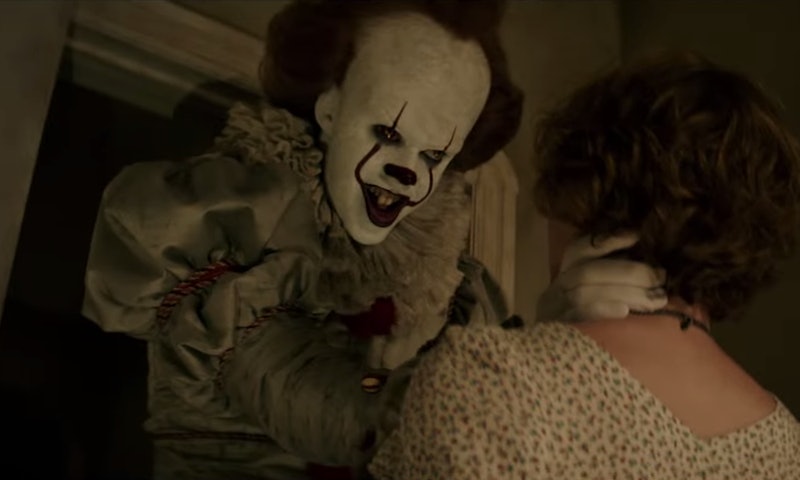 The Losers are officially back in Derry, Maine. According to IndieWire, on Wednesday night, attendees at the ComicCon-adjacent ScareDiego event in San Diego, California, were treated to the first behind the scenes footage from It: Chapter Two, which gave viewers a sneak peek at the adult Losers' Club and an early preview of the highly anticipated It sequel.

The follow-up to 2017's massive box office smash, It, will jump forward in time, focusing on the grown-up members of the Losers' Club who survived the murders and return to Derry after murderous clown Pennywise, played by Bill Skarsgård, resurfaces. On Wednesday, Andy Muschietti, the film's director, sent ScareDiego some footage from the set in Toronto, where the movie is currently in production, according to IndieWire. The early behind-the-scenes footage reportedly features the film's stars, James McAvoy, Jessica Chastain, Andy Bean, Bill Hader, Isaiah Mustafa, James Ransone, and Jay Ryan. The new cast will play the adult version of beloved characters from the first film, Bill Denbrough, Beverly Marsh, Stanley Uris, Richie Tozier, Mike Hanlon, Eddie Kaspbrak, and Ben Hanscom, respectively.

Per IndieWire, the clips showed Muschietti looking over storyboards and costumes for the movie, based on Stephen King's famous 1986 novel of the same name. The clips also featured footage from various scenes, including Chastain talking on a phone, Hader crying just one lone tear, and a peek inside the sewer tunnels where Pennywise dwells. Fans also reportedly got to see the Losers' Club reunite for the first time as adults. In once scene shown, they reportedly meet up at a Chinese restaurant where Richie (Hader) bangs a gong and asks the group, "So, what do you want to talk about?"

Earlier this week on Wednesday, Chastain also shared another first look of sorts. She reposted an edited image made by fan Shaun Watson on Twitter that shows Chastain's Beverly sitting across a table from her younger counterpart, played by Sophia Lillis. In the photo, they're both wearing the same blue dress, and Lillis' character leans across the table, passing a red balloon, Pennywise's haunting signature, to her older self. Alongside the photo, Chastain tweeted, "Passing of the red balloon..."

The rest of the original losers club, played by Jaeden Lieberher, Wyatt Oleff, Finn Wolfhard, Chosen Jacobs, Jack Dylan Grazer, and Jeremy Ray Taylor, will also return. As previously revealed by Muschietti, while the movie will be set in present day, as opposed to 1988 and '89 like the first film, the kids will still play an integral part in the story via flashback sequences.

He told The Independent in September 2017:

"In my opinion, it can't only be about adults. Something that I love about the book is the dialogue between the two timelines because, ultimately, it’s a story about childhood. It’s a love letter to childhood, but it's also a story of the death of childhood. It's symbolic, of course, because when Pennywise describes himself as the eater of worlds, he's not talking about a monster that eats planets; he’s talking about eating the world of imagination and magic."

While most major It 2 details are being kept under wraps, Muschietti emphasized in a separate interview with Variety that the flashbacks would play a major role in the new film. "I want to make those flashbacks essential in the plot where in order for the Losers to figure out the clues to defeat Pennywise, they have to retrieve their memories from the past," he said.

Fans will have to wait until the film hits theaters on September 6, 2019 to see how the story plays out, but here's hoping there will be plenty more sneak peeks between now and then.