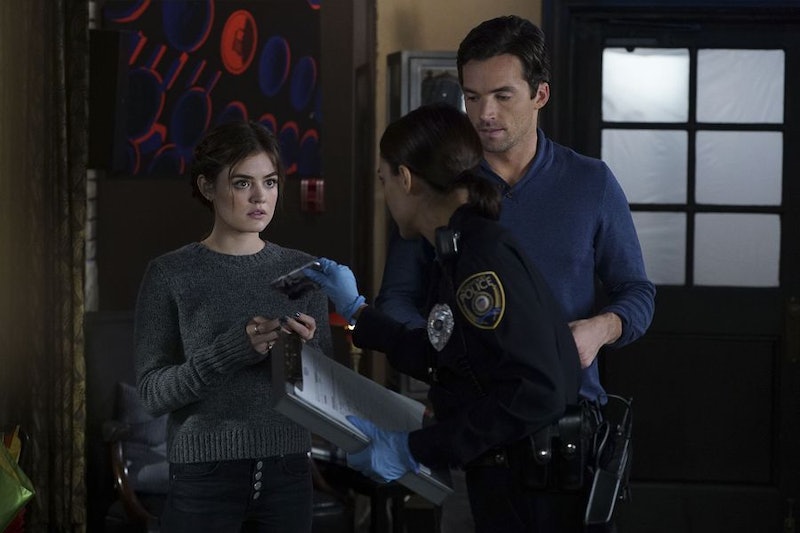 Calling all armchair detectives on the trail of A.D. E! has just published some spoilery Pretty Little Liars Season 7 photos. At least, I think there may be a spoiler hidden in here. The photos, taken from the upcoming Episode 19 "Farewell, My Lovely" show a person who appears to be Mona from behind on a couch and Spencer confronting her with intensity. It's also notable that Mona is wearing glasses. We've seen these glasses before of course, both in the previous episode "Choose or Lose" and many, many years ago, in Season 1, when she was a geek being bullied by Ali. So these feel like an important detail. More on this later. Beyond that, there's also a still of Janel Parrish's character in the bell tower of the church (it appears to be the same church Charlotte got pushed from), holding a bunch of flowers. Basically, there's a lot to unpack here.

Given the fact that it looks like Spencer is confronting her, I would argue this is evidence that Mona is not A.D. Historically, the Liars have been pretty terrible at guessing who each "A" is and, in terms of timing, it seems massively unlikely that an experienced showrunner like I. Marlene King would do a big reveal in the penultimate episode of the show rather than in the grande finale. Presumably, the Mona-as-A.D. hunt will be used to distract us from the real culprit.

In Season 6, Episode 19, Emily forces Mona to reveal what she was doing the night Charlotte was murdered and the smartest girl in Rosewood reveals that she had phoned up Ali's sister on the night of her death and asked her to meet her at the Two Crows diner. However, she claims she never showed up, because she was already dead by this point.

In the same episode, we also learn that Mona was rooting for the Liars' former torturer to leave the psychiatric hospital because she wanted to talk to her "away from everybody else." She tells Emily in the episode: “Charlotte DiLaurentis knew everything about every one of us. Every mistake, every lie, every crime. And she never implicated us, the five years she was locked up, she just sat in that hospital, ticking like a time bomb.” And she finally argues that she wanted to meet Charlotte to "find out what she was going to do with all her new freedom." This sounds like a pretty decent motive to me for someone as controlling as Hanna's non-Liars bestie to want to get rid of Ms. DiLaurentis.

In Episode 17 and 18, we've also been getting more camera time focused on Mona alone, away from the Liars. It's possible that's simply to set her up as the false A.D. with incriminating-looking evidence like her new lair or her slavering over the board game. But I'd argue this is to set us up for a big reveal, because something weird is going on with Mona. One potential reveal is that of Season 1's A as the killer. The still of Mona in the bell tower with the bouquet of flowers looks like it's taken from another solo scene and that, combined with the title ("Farewell, My Lovely"), could suggest that this will be a moment in which we realize that she did kill Charlotte.

This could have interesting implications for how things will play out with regard to the time-jump that will take place between Episode 19 and the finale. The wonderful Pretty Little Puppet Masters Facebook group has a theory on this:

"In the finale promo, we see Mona in what seems to be a hospital gown. Will she be sent to WELBY for killing Charlotte and maybe for being "AD"? I think so! Mona asks "Are you here to kill me??" She definitely could be talking to the REAL AD.

So what I'm saying, is that Mona could go down as Charlotte's killer, AND "AD" next week. She goes to Welby. The girls think they are safe again for a year (or however long the time jump is). It's also possible they go to jail, but that's a different story. The time jump happens, and we realize Mona was NOT AD- again."

But I do have another theory as to what the big Mona reveal could be. In Episode 18, Hanna, the Liar the brunette is closest to, asks if anyone noticed that Mona seemed a little off. And she's right. After her makeover, we've never seen Mona looking anything other than flawless. Now, I think glasses are fabulous, but given that she possibly associates them with her pre-makeover, "Loser Mona" days, it seems unlikely that she would wear the exact same pair of spectacles without there being a deeper meaning here.

Could Mona, not Spencer, have a twin? It's a pretty skimpy theory, and I admit that there's far more evidence that Spencer is the one with the twin. But I'm putting it out there; that could be the other dark secret Mona's hiding from the Liars, unless the glasses are simply meant as a visual reference to the fact that she's harnessed the same inner darkness she had access to in Season 1.

Either way, something is rotten in the town of Rosewood and I can't wait to find out what it is.