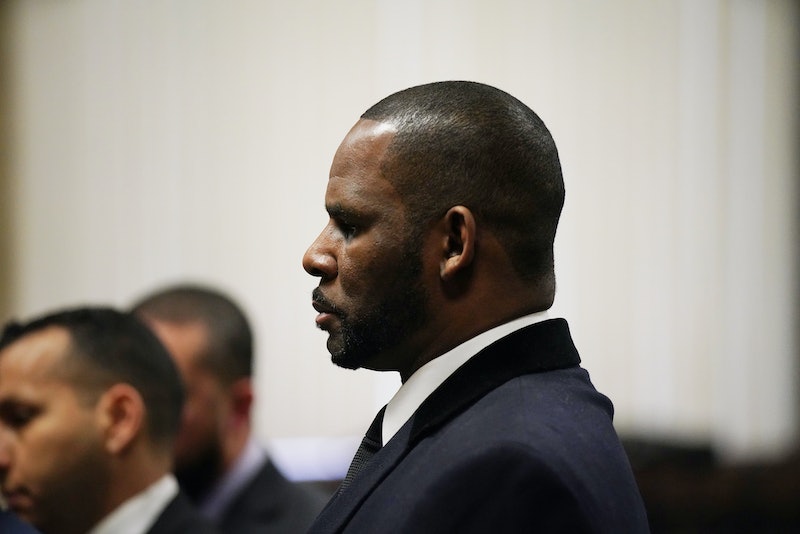 The Chicago Sun-Times reported that new charges against R. Kelly were filed Thursday by the Cook County State's Attorney's office. According to the Sun-Times, Kelly now faces an additional 11 counts of sexual abuse, and could face a maximum of 30 years in prison if convicted.

"We’ll see what the charges are, and we’ll proceed accordingly,” Kelly's attorney Steve Greenberg told the Sun-Times. “I know this much: it’s old. They’re allegations from years ago.” Bustle has reached out to Greenberg and the Cook County State's Attorney's office.

In January, the documentary Surviving R. Kelly detailed new allegations against Kelly, which he staunchly denied soon thereafter. Shortly after the documentary was released, Kelly was charged with 10 counts of aggravated sexual abuse. Cook County prosecutors said that the alleged abuse involved four victims, at least three of whom were minors at the time, between 1998 and 2010. Those were all Class 2 felonies, which carry no minimum prison sentence, per Sun-Times.

Kelly pleaded not guilty to those charges, and Greenberg told the AP that “the allegations aren’t true because he never knowingly had sex with an underage woman, he never forced anyone to do anything, he never held anyone captive, he never abused anyone.”

Kelly has been jailed twice in recent months, CNN reports — once due to the aforementioned 10 counts of aggravated sexual abuse, and once for allegedly failing to pay his ex-wife child support. Greenberg and Kelly's publicist Darryll Johnson told reporters that Kelly couldn't afford the full child support payments; in May, Greenberg gave the court a $62,000 check to bring Kelly up to date on his debt, the Sun-Times reports.

Kelly has been accused of sexual misconduct multiple times throughout his decades-long career, as the BBC reports. Between 2002 and 2004, he was charged with more than two dozen counts of making child pornography after prosecutors found a video and images that they claimed showed Kelly having sex with minors. Kelly pleaded not guilty and was acquitted on 21 of the charges after the jury determined that they couldn't know the age of the person depicted in the video. The other charges were dropped after a judge determined that the photos of Kelly were obtained illegally.

The exact nature of the latest charges brought against Kelly remains unknown, but the Associated Press reports that they all concern one victim. Kelly is scheduled to appear in court for the new charges on June 6, Rolling Stone reports.