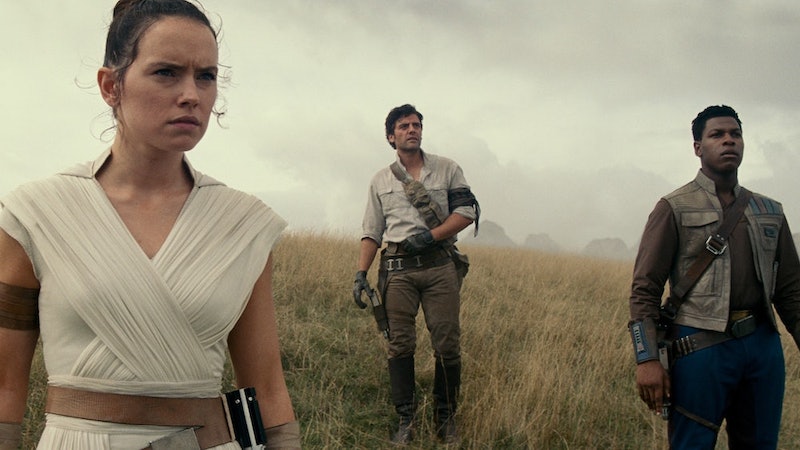 The force is strong in the final Star Wars trailer that debuted during ESPN’s Monday Night Football. The new Star Wars: The Rise of Skywalker trailer, which debuted on Oct. 21, puts Rey and co. front and center. In J.J. Abrams’ final installment of the trilogy and Skywalker saga as a whole, the surviving members of the Resistance prepare to face off against the First Order once more in a final battle. While a brief clip of the teaser had been leaked earlier online, a full-length trailer has finally dropped for the last installment of the pop culture juggernaut, in theaters Dec. 20.

In the trailer, a voiceover suggests that Rey and friends coming together may not be such a good thing after all. While there's no sign of Dark Rey, she and Kylo Ren have several moments, and he seems to tell her that he knows her, even if no one else does. They're even seen fighting side-by-side — whether this is good news for the galaxy or not remains to be seen.

Elsewhere in the clip, the Ghost (yes, the one piloted by Hera Syndulla in Star Wars Rebels and featured in Rogue One: A Star Wars Story) also appears to make a cameo. This could indicate that the Ghost will play a prominent role in the Resistance’s final battle against the First Order.

The new Rise of Skywalker trailer comes on the heels of several teasers unveiled within the last few months. At the D23 Expo in August, Disney debuted a special look of the film for expo attendees. In the clip, revered faces of Star Wars’ past such as Harrison Ford, Billy Dee Williams, and Carrie Fisher were invoked to merge with the faces of Star Wars’ present such as Daisy Ridley, John Boyega, and Adam Driver. “This is your fight,” the teaser narrates. “Your journey nears its end.”

At the expo, Abrams also revealed that the film doesn’t immediately pick up after The Last Jedi. "Some time has passed,” he said, as per Comicbook.com. “This movie is an adventure the group goes on together. One of the great things about getting to work on the movie is the dynamic between all of the characters… It’s something I’m excited for you all to see.”

The film also strives to serve as a “cohesive” ending to all nine Star Wars films. In an interview with Entertainment Weekly published on Oct. 18, Abrams said of Rise of Skywalker, “Endings are the thing that scare me the most. This is about bringing this thing to a close in a way that is emotional and meaningful and also satisfying in terms of actually answering [as many] questions as possible.”

He added, “So if years from now, someone’s watching these movies, all nine of them, they’re watching a story that is as cohesive as possible.”

Star Wars: The Rise of Skywalker arrives in theaters and a galaxy far, far away on Friday, Dec. 20.

More like this
At 28, Lesley Manville Was Acting, Picketing, & Singing Kate Bush Songs
By Olivia-Anne Cleary
Reese Witherspoon Gave Fans Hope For 'Legally Blonde 3' After This Surprising Movie Inspired Her
By Jake Viswanath
22 Movies On Netflix That Are Perfect For The Whole Family
By Bustle Editors
Netflix's 'Do Revenge' Is Inspired By Classic Teen Revenge Movies
By Sophie McEvoy
Get Even More From Bustle — Sign Up For The Newsletter