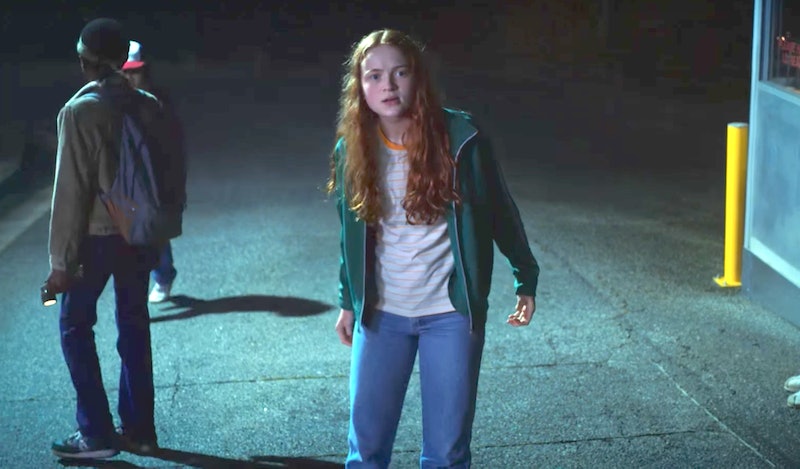 If you've watched the latest teaser, you might be asking who the red haired girl in the final Stranger Things Season 2 trailer is. She appears to be in close proximity to Dustin and Lucas, and she appears just as Lucas says "It's Judgement Day — which is why we need as much help as we can get." She also appeared briefly in a previous trailer, though we hardly got to see her in action. Well, for those who don't already know, Stranger Things' newest character is called Max and is played by Sadie Sink. NMW describes her as a "Hawkins newcomer who becomes friends with the gang," and that friendship is truly on display in this final trailer.

From the new footage, it seems more than likely that Max is going to provide additional support while the gang are battling whatever creepy otherworldly creature they need to save their town from this time round. But, that said, there is evidence against this. For one thing, there's the Stranger Things Season 2 poster, which shows what look like Mike, Dustin, Lucas and Will from the back gazing up at a stormy sky. If Max is so important to their mission, why isn't she shown here? But, then again, since Eleven also appears to be absent from the poster, perhaps this is because the two female characters end up separating from the main group to tackle a different mission.

As if you needed any more reasons to be excited about Max.

A year later, Finn Wolfhard, who plays Mike on the show, opened up further about the character to People, explaining that Max is "our new friend... from San Diego, she comes into town and sort of comes [into] our friend group." He continued, "She’s this sort of skater punk girl, and Dustin and Lucas end up kind of falling in love with her. And she sort of gets into the group, and I’m not really happy with it because I’m kind of envious because they’re in love and I’m not."

But what does the actor herself say? According to Sink, who was interviewed at Comic Con in July 2017, Max "is a bit different from normal girls." But don't get too excited. If you were hoping for Eleven-like quasi supernatural powers, that's not what the redhead means. She explains "She’s a tomboy… She obviously doesn’t wear any dresses, you’ll never see her in a dress."

Although she doesn't appear until relatively far into the trailer, it seems likely that she's going to be an addition from the very first episode of the new season. How else to explain the name of the Stranger Things premiere episode, "Madmax"? While the episode name could just be wordplay (maybe it's possible that Max is either eccentric or willing to push boundaries), given the clear reference to the dystopian thriller from 1979, it could mean that she's reminiscent of one of the characters in the movie.

But the movie had relatively few named female characters — there was May Swaisey, an old lady who owned a farm. Then there was Mel Gibson's character's wife Jessie Rockatansky who was a compelling mix of toughness and vulnerability. She manages to escape from Toecutter's gang when she and her son run into them, but she also gets badly hurt to the point of having to go to the hospital later and it's her injury that pushes her husband over the edge. So maybe Max — or Max getting hurt — will be a catalyst for stranger things happening.

Ultimately, only the first episode will really tell us even more about Max. But the above gives us some great starting hints — she's a tomboy, an out-of-towner, and hopefully an extra pair of hands in the fight against the dark forces of The Upside Down. Plus, she's ready to kick some serious monster butt.

More like this
'Stranger Things' Finn Wolfhard Is “Proud” Of Noah Schnapp For Coming Out
By Sophie McEvoy
Netflix Shut Down 'Bridgerton' S3 Rumours About A “Very Dark” Storyline
By Bustle
Bill & Frank’s 'The Last Of Us' Episode Has Twitter Emotionally Wrecked
By Alyssa Lapid
This 'Gossip Girl' Wardrobe Error Has Gone Viral On TikTok
By Alyssa Lapid
Get Even More From Bustle — Sign Up For The Newsletter
From hair trends to relationship advice, our daily newsletter has everything you need to sound like a person who’s on TikTok, even if you aren’t.