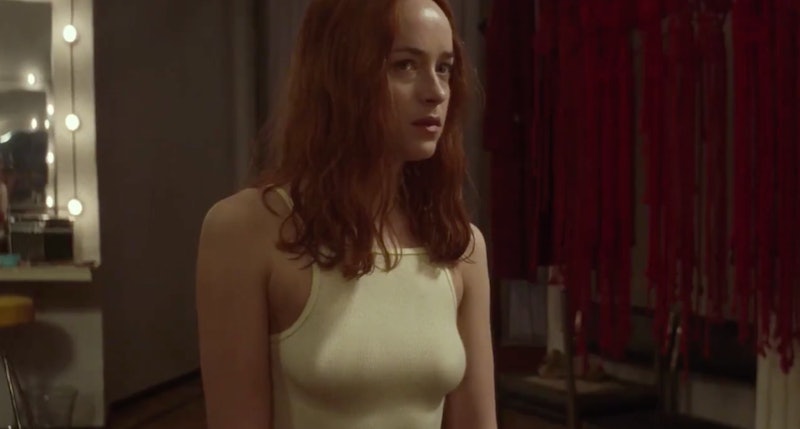 Horror movies are a staple around Halloween time, and honestly any night during the year when you want to cuddle up and just scream your brains out. And while most are about ghosts or supernatural creatures, few can truly get under your skin, especially if you're a horror movie fanatic. Now a new contender for "favorite/scariest horror film" is making its way to theaters this fall, and audiences might not be ready for the creepiness judging by the newly released Suspiria trailer stars Dakota Johnson.

Based off of the 1977 movie by the same name, Suspiria stars Johnson as Susie Bannion, an aspiring professional dancer who moves to Berlin to study at a prestigious dance academy. The school, however, isn't as glamorous as it seems, as evidenced by one of the teachers there, Madame Blanc, as played by Tilda Swinton. In the trailer, Madame Blanc seems to keep an unblinking watch on her students, and if her piercing And from her first appearance on, the trailer just gets more and more horrifying.

There's also a crazed — and damp-looking — Chloë Grace Moretz as Patricia Hingle, who seems to be a former student of the school. Why she's crazed will certainly play into the plot. She seems haunted by whatever is going on in the dance school. Whatever evil lurks there is only shown in short glimpses, but clearly visible is a massive hook and an ominous presence behind the mirrors at the dance studio.

There's a very distinct tone to the trailer, giving it almost an ethereal yet haunting feel. The movie, directed by Luca Guadagnino, definitely appears to be leaning more towards quiet suspense than jump scares. It doesn't help that some of the characters (notably Lutz Ebersdorf as Dr. Jozef Klemperer) speak in a breathy, high voices, giving almost Tangina Barrons in Poltergeist vibes. The score by Thom Yorke, singer and songwriter for Radiohead doesn't help lighten the mood either, and the resulting dreary atmosphere makes it all-the-more frightening.

Other than the generally creepy tone, it's hard to say exactly what's going on in Suspiria. There's a lot of talk of possession or embodying something in the trailer. In one scene, Patricia mentions how "she" wants to get inside of her. Then later, someone describes dancing another dancer's choreography as becoming the creator's image.

At the forefront of it all is star Johnson's apparent transformation from an aspiring dancer to an obsessive one. Her dancing in the trailer becomes frantic, and there's talk of her making a deal with Madame Blanc, hinting at some kind of "deal with the devil" scenario. If her character did, in fact, make such a deal, it's certainly not going to end well. The final moments of the trailer show a series of terrifying images, including a terrifying creature, someone is scaling a doorframe without using their limbs, and then there seems to even be a dancer without one of her limbs.

Whatever evil is lurking in Suspiria, based on the trailer it's both beautiful and chilling, and it wants Dakota Johnson.

More like this
You Definitely Know The Voice Of Shuri's AI In 'Black Panther: Wakanda Forever'
By Brad Witter
Keke Palmer Finally Showed Angela Bassett Her Famous Impression Of Her
By Stephanie Topacio Long
How To Stream 'White Noise' On Netflix
By Grace Wehniainen
You Can Finally Stream 'Ticket To Paradise' At Home
By Chloe Foussianes
Get Even More From Bustle — Sign Up For The Newsletter