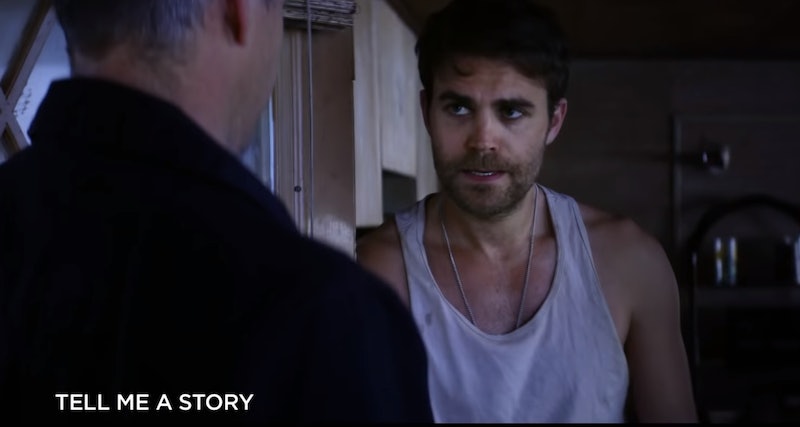 What if the very fairytales that once helped you go to sleep at night became the thing that now gives you nightmares as an adult? Based on the trailer for the upcoming series Tell Me A Story from CBS All Access, that concept is about to be put to the test. Created by Kevin Williamson — who has gifted the world with shows like Dawson's Creek, The Following, and The Vampire Diaries in the past — this new series reimagines the fairytale classics everyone knows and loves as a psychological thriller that's guaranteed to make you start sleeping with the lights on. In other words, forget everything you thought you knew about those "once upon a time" stories — because living happily ever after is clearly about to be a thing of the past.

"What I like is that there's nothing on TV like it," Williamson said of the series during the CBS All Access Television Critics Association panel on Sunday, according to Deadline. "It sits in its own little world." Based on an Argentinian anthology series, Tell Me A Story provides a dark, modern-day interpretation of three different fairytales: "Red Riding Hood," "The Three Little Pigs," and "Hansel and Gretel," which will play out in three separate storylines that'll huff and puff and completely blow your childhood memories to dust.

However, it's important to keep in mind that the fairytale aspect is merely a jumping off point for the show. There won't be any supernatural aspects (like talking pigs or wolves dressing up like grandmothers), but rather they're there to serve as metaphors for various morals to the story that center around love, greed, murder, and everything in between. "These characters are dealing with what's going on today," Williamson added during the same TCA panel, referencing the current political divide America is facing. "All these ideas are brought on to this fun, fast-paced and twisty show."

But just in case the plot itself isn't compelling enough for you, the impressive cast is sure to pique your interest. The Vampire Diaries alum Paul Wesley can be seen in various shots throughout the trailer, though his character appears to be nothing like the kind-hearted Stefan Salvatore who stole our hearts during his time in Mystic Falls. Other cast members include the likes of Sex and the City's Kim Cattrall, James Wolk, Danielle Campbell, Billy Magnussen, and Dania Ramirez, all of whom will play vital parts within the serialized drama.

The footage provided does little to clear up how exactly all of these stories will fit together, but it's easy to pick up on a few of the fairytale references — particularly when Cattrall's character offers Campbell's character a red-hooded jacket since "it may rain later." And, of course, the pig masks that are used during a robbery leave little to the imagination (and also prove to be a lot more terrifying that you would expect).

So if you're a glutton for punishment and never want to look at your favorite bedtime stories again, be sure to tune in for the Tell Me A Story premiere, which kicks off on Wednesday, Oct. 31 on CBS All Access.