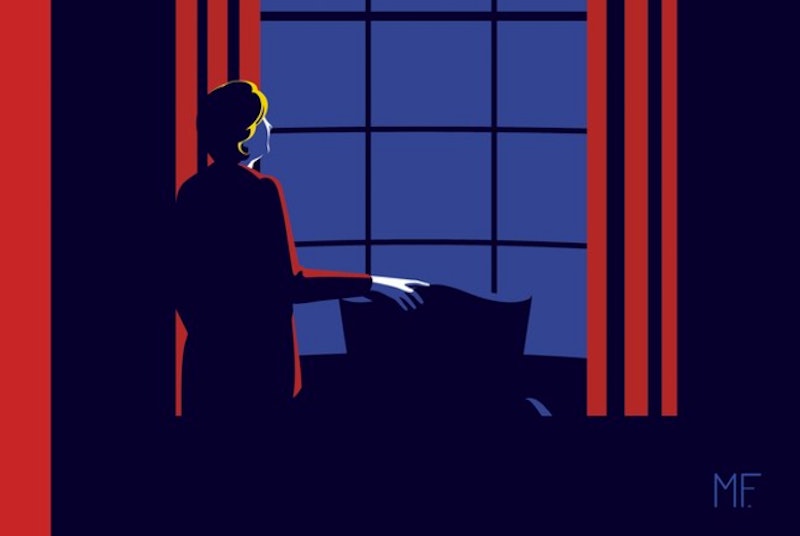 On Wednesday evening, just a day after Hillary Clinton's What Happened hit shelves, The New Yorker released an "If Hillary Clinton Had Won" cover. And hauntingly, it is the cover that would have been published if she had won the 2016 presidential election. The illustration showcases a full moon which can be seen glowing outside while Clinton stands by the Resolute Desk in the Oval Office, hand on the chair, with her back turned to the reader. Rendered by Malika Favre as "The First" in stark colors of black, blue, red, and white, it is one drawing that may bring back memories of disappointment and hurt among some Clinton admirers.

The cover was shared in an in-depth interview with Clinton titled "Hillary Clinton Looks Back In Anger" taken by New Yorker journalist David Remnick. The interview explored Clinton's life after the 2016 presidential election, how she "lost a race that few thought [was] possible to lose," and how Clinton felt that there were "times when all I want to do is scream into a pillow."

But not all is abysmal in Remnick's rendezvous with Clinton. The 2016 presidential candidate told Remnick that she found "catharsis" in writing her book, detailing what had taken place during the campaign, and how she managed to get back on her feet after her loss by initially remaining out of the public's eye.

While speaking with Remnick, Clinton discussed how she was not alone in her grief; her friends stayed by her side and helped her cope with her defeat last year. She also mentioned that a bit of Chardonnay helped as well as practicing "alternate-nostril breathing" as one form of yoga. To keep her literary appetite satiated, Clinton reportedly read Elena Ferrante's novels, Dutch priest Henri Nouwen's work, and watched episodes of The Good Wife and Madam Secretary. In other words, life went on.

The what-if art cover of The New Yorker magazine is bound to move Clinton's supporters. Even the art editor behind the work, Francoise Mouly, spoke of how she felt while she was quickly working on the cover on the night of the election. While talking to The Washington Post, Mouly said that the cover brought back memories of the election night when she was toiling to finalize the image. She had hope for her and wanted to get Clinton's face "just right."

Things turned out to be different. The editor went on to say, "The sense of dread that crept among the few colleagues still in the office eventually overwhelmed me and I left. The pent-up hope, the sense of accomplishment, the turn toward the future that we embraced up to that day is still in the image."

More like this
5 Ways To Stand In Solidarity With Women In America From The UK
By Sophie McEvoy
How To Fight For Reproductive Rights, Based On How Much Time You Have
By Courtney Young
16 Novels That Paint A Realistic Portrait Of Abortion
By K.W. Colyard
5 Gripping Books To Read From Women’s Prize For Fiction Winner Ruth Ozeki
By El Hunt
Get Even More From Bustle — Sign Up For The Newsletter