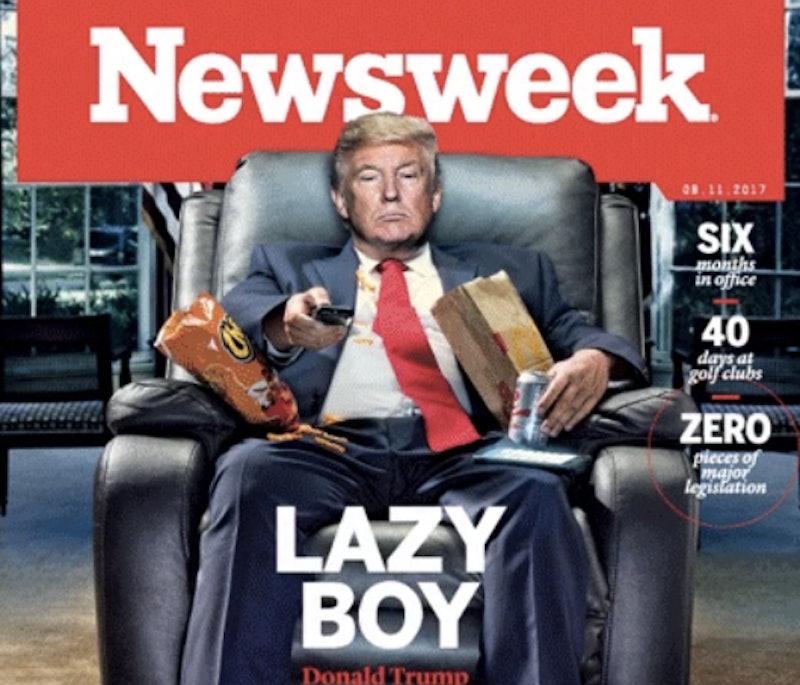 On Thursday, the first glimpse of Newsweek's upcoming cover hit social media, and suffice it to say, it's one that the commander in chief of the United States is not likely to appreciate. The latest Newsweek cover portrays Trump as a "Lazy Boy," a junk-food laden couch potato with a Diet Coke in one hand, a TV remote in the other, and a pair of bags tucked on either side of him — one full of Cheetos, the other full of McDonald's.

To complete the image, Trump has a handful of Cheetos sprinkled on the front of his shirt, next to one of his characteristically oversized red ties. And, of course, the capper to the whole thing is the title, which any president with a reportedly voracious media fixation is not going to appreciate.

In white block-lettering, it reads "Lazy Boy," followed by a rather demeaning caption: "Donald Trump is bored and tired. Imagine how bad he'd feel if he did any work." For the record, credit the visual artists who put the cover together, because Trump's facial expression does indeed read as a combination of boredom and tiredness.

According to Newsweek's Alexander Nazaryan, the cover was to some extent motivated by the wide gap between the current president's aggressive rhetoric toward former President Barack Obama when it came to the latter's golf and leisure schedule ― for instance, accusing Obama of playing golf "to escape work while America goes down the drain." Naturally, the cover's scathing implications drew many comments on Twitter.

Nowadays, Trump's penchant for ditching the White House to hit the links, often in clubs he himself owns, has becomes something of a news story in itself. As Naxaryan notes, the website "Trump Golf Counter" is keeping track of his trips to the links, and the financial impact it is having on American taxpayers.

At the time of this writing, he's reportedly visited golf clubs at least 41 days since his inauguration ― nearly one-sixth of the total days he's been in office ― and has been publicly confirmed to have actually hit the links 19 times. In all, the site pegs the cost to taxpayers for these outings at $55 million. By way of comparison, at this time in his presidency, Obama had made 12 trips to golf courses, less than one-third Trump's total.

In other words, he's keeping a vacation and leisure schedule that seemingly fits the "lazy boy" moniker, however much he might not want to admit that, and however much some of his supporters might deny it. Thus far, Trump hasn't offered any public reaction to the cover, although given his habit of offering blunt, sometimes aggressive reactions to media coverage on Twitter, that could easily change.