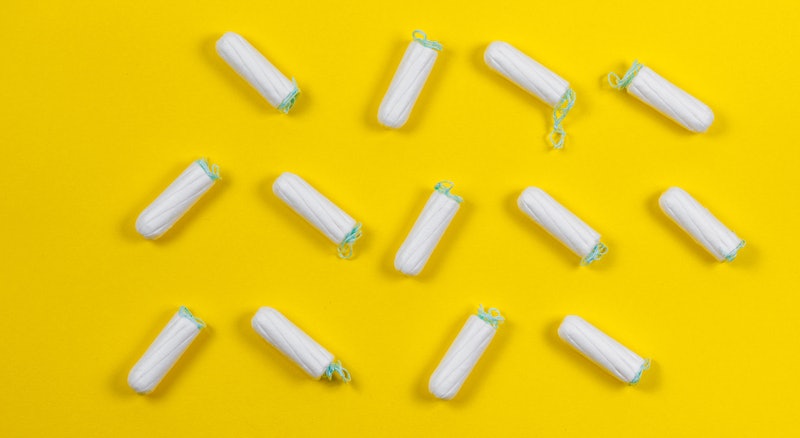 Last month, the British Medical Association released a survey indicating that two in five UK hospital trusts and health boards did not offer free sanitary products to inpatients — despite many providing free razors and shaving foam. Fortunately, that's about to change in England: the NHS will provide free tampons and pads to people in hospital from this summer onwards, the BBC reports. Cause for celebration, undoubtedly — but how did it take this long?

As the Guardian reports, Simon Stevens, chief executive of NHS England, said of the move, "It’s fundamental that we give patients the best experience possible during what can be a stressful time of their life, and by providing sanitary products the NHS can prevent unnecessary embarrassment and leave people to focus on their recovery." Free sanitary products will be available both to those in urgent care and those on longer stays, such as patients on mental health wards, the newspaper says.

According to the BBC, the British Medical Association (BMA) contacted 223 hospital trusts and health boards in the UK, asking whether they provided their patients free sanitary products; 187 responded to the survey. While 104 said they did offer them, 54 said they were only available in small quantities or in emergencies, while 25 said they didn't provide them at all. A further 27, meanwhile, didn't sell pads or tampons anywhere on the hospital site.

The BMA wrote to NHS England, urging them to establish a new policy concerning sanitary products. Professor Dame Parveen Kumar, the BMA board of science chair, told the BBC, "Hospitals have an opportunity to lead the way in tackling period poverty and should be a shining example of the progress that can be made on this important issue."

Eleanor Wilson, of the BMA's medical students' committee, told the broadcaster, "By not providing them with something so key to their health and wellbeing, it has a big impact on their sense of self-worth — we are effectively withholding that dignity from them."

"While some hospitals have good provision, in others, patients have had to face embarrassment and hope that relatives can bring [sanitary products] in," Wilson said. "For some that is not an option, and it can often become more challenging for young and teenage paediatric patients."

The move from NHS England was welcomed by Kumar, who told the Guardian, "We are pleased that our work with NHS England has culminated in such a successful result, bringing an end to indignity on top of ill health."

As the BBC reports, the BMA hopes to see the new policy extended to the rest of the UK — though, as the broadcaster points out, Scotland, Wales, and Northern Ireland already have some measures to tackle period poverty in place. Scotland provides free sanitary products in schools, colleges, and universities, while low income households in Aberdeen will receive free products under a new pilot scheme.

In Derry, Northern Ireland, free sanitary products are available in some public buildings, while a government fund in Wales will offer free products through schools, food banks, and community groups. Overdue progress to combat period poverty is finally being made — but until every person who menstruates has access to the sanitary products they need, there's still an awfully long way to go.