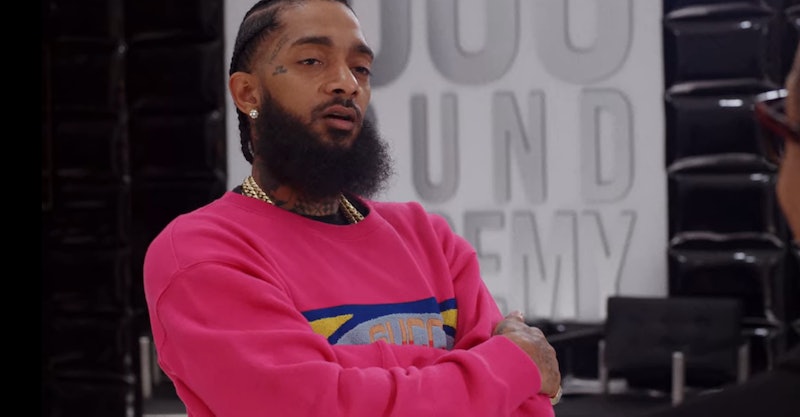 The first four episodes of Netflix's new hip-hop competition show are full of the kind of heart, skill, and talent that just brings a smile to your face. The series is a celebration of hip hop culture, which is why the first episode of Rhythm + Flow features rapper Nipsey Hussle. Hussle was shot and killed on March 31, per NBC News, which makes the scenes from Rhythm + Flow, filmed before his death, so poignant. T.I., one of the show's main three judges, meets Hussle at his music school 1500 Sound Academy, where the rapper is hoping to recruit some talent for the competition.

"In hip-hop, you never forget where you came from, no matter how big you get," T.I. narrates. "That's why I felt it was imperative to call upon somebody who made it his unwavering mission to give back to his community no matter what: my partner, the legendary Nipsey Hussle. Little did we know it would be one of the last times that we'd see each other. And his music, along with his message, will live on forever."

According to their social medias, T.I. and his fellow judges Chance the Rapper and Cardi B began their hunt for talent in November 2018. That's when T.I. put out a call for "the hottest undiscovered rapper" on Twitter. It's unclear exactly when they met, but on Jan. 15, T.I. shared a photo of them together, wearing the same outfits pictured in the episode.

The two came together in the school's lobby to chat before pulling some students to hear a few bars, and Hussle, who was up for the 2018 Grammy for Album of the Year, explained how his love of rap music began.

"I bought into it," he said. "I know your story. I know what your success means 'cause I know what came before it." He often used his music as a form of activism for the Black community, but he also took it much further than that. For example, at the time of his death, he was working on multiple projects that advocated for people of color, and, according to L.A. Police Commissioner Steve Soboroff, he had a meeting about gun violence scheduled with the L.A. police department for the day after his death.

At the academy, the rappers made their way to a small class where Hussle and Grammy-winning producer Lamar "Mars" Edwards elected Inglewood IV to perform for T.I. After hearing the artist's work, he didn't hesitate to invite him to the first round of Rythm + Flow auditions, and IV knew it could change his life.

The big stage moment came, and he performed for all three judges and Snoop Dogg. They recognized his talent, but called his song choice dark. Still, they gave him a pass to the next level, and IV couldn't make it off-stage without shedding tears of joy. "The fact that they were feeling what I was doing lets me know that I really got this," he said.

As Hussle would say, "The marathon continues." And it certainly will, as Rhythm + Flow features the next generation of up and coming hip hop stars.