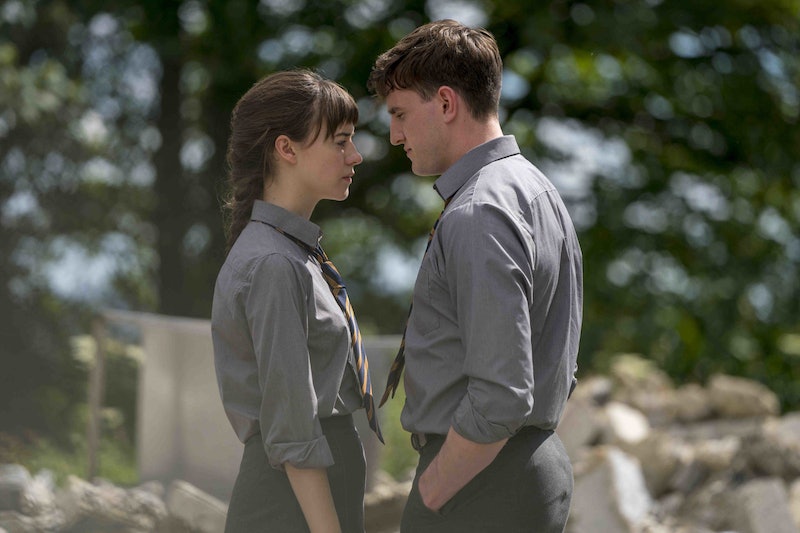 Ah, to be young, in love, and trying to hide your relationship from everyone you know. Two years after Sally Rooney's bestselling novel became a phenomenon, Hulu has released the trailer for Normal People, and the small screen adaptation promises to be just as steamy, heartbreaking, and addicting as the book it's based on. Set over the course of several years, Normal People chronicles the passionate — and complicated — relationship between Marianne (Daisy Edgar-Jones) and Connell (Paul Mescal), two young adults who live in opposite worlds.

"It would be awkward if something happened with us," Connell says early in the clip, though it's clear that he really wants something to happen with Marianne. "Nobody would have to know," she replies, and so begins their tumultuous romance. Though Marianne tells her friend that "we [just] hook up, secretly," it soon becomes clear that both she and Connell care a lot more for one another than they're willing to admit — and more than anyone in their lives want them to.

Of course, in addition to all of those complicated feelings and conflicting desires, the Normal People trailer is also incredibly hot, featuring cinematic shots of Connell and Marianne staring longingly at one another, making out in cars and slowly peeling each other out of their clothes. It's all, as Connell says at one point, "so corrupt and sexy."

The series will likely delight fans of the novel, as Rooney — who was long listed for the Man Booker prize in 2018 and the Women's Prize for Fiction in 2019 for Normal People — was apparently heavily involved in bringing the book to the screen. In addition to making her screenwriting debut (alongside Alice Birch and Mark O’Rowe), Rooney "was involved in all the early discussions about how many episodes, the format, conversations about actors, as well as reading various versions of the script," according to a Guardian interview with producer Ed Guiney.

In the same interview, director Lenny Abrahamson explained that he was drawn to the way Rooney portrayed young love in such a unique and original way and that he wanted to make "a very strong statement" with the series. "The territory is so interesting — it’s a positive account of two young people falling in love," he said of Normal People. "It sounds simple but there’s a lot cynicism around that kind of material. It’s a look at intimacy in the 21st century and a portrait of a very tender relationship. It’s radical in a sense."

And while Normal People will have plenty of steamy sequences, Abrahamson also shared that he think audiences won't let the sex scenes overwhelm the pair's love story. “There’s room for different voices in TV now," he explained. "You have Euphoria and Sex Education, which are the kind of shows that simply weren’t about 20 years ago. They’re more risque and audiences can handle that."

All in all, it seems like people will be just as obsessed with Normal People once it premieres on April 29 as they were with the novel when it first came out.

More like this
Nicola Coughlan Shared A Lady Whistledown Excerpt From ‘Bridgerton’ Season 3
By Grace Wehniainen, Alyssa Lapid and Sam Ramsden
Kendall Jenner Thinks Tristan Thompson "Wanted To Trap" Khloé With Another Baby
By Jake Viswanath
The 'Reasonable Doubt' Cast Includes A 'Save The Last Dance' Reunion
By Grace Wehniainen
Khloé Kardashian Debuts Baby Boy On 'The Kardashians' Season 2 Premiere
By Jake Viswanath
Get Even More From Bustle — Sign Up For The Newsletter