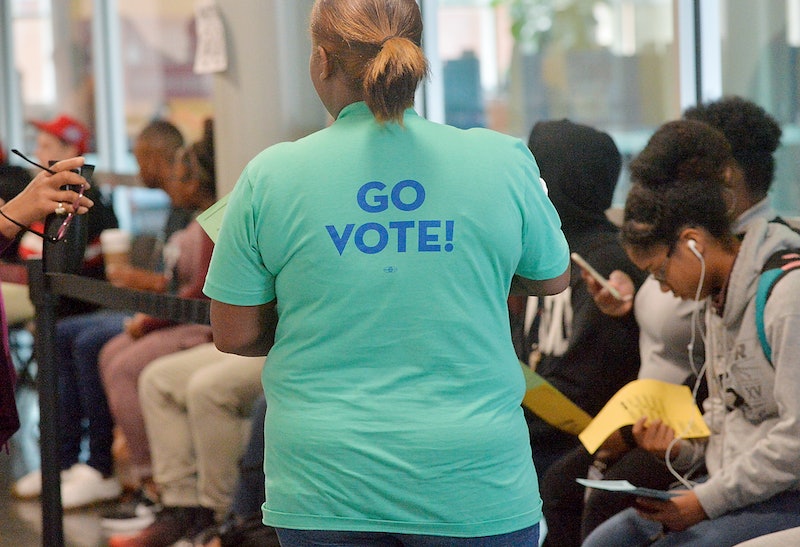 After the state election board concluded in February that the initial race had been impacted by fraud, the North Carolina special election date for the Ninth Congressional District has finally been set. As The New York Times reports, though, it's not happening any time soon. In fact, the district is going to be without House representation for at least another six months.

In the first election, the unofficial ballot count revealed Republican Mark Harris had a narrow lead of 905 votes over Democrat Dan McCready. The election was never called, though, and an investigation into ballot fraud on the Harris campaign began shortly after the midterms. Though Harris has continued to maintain his innocence amid the investigation, he has dropped out of the second race, and will not be running again. Per the Times in February, he cited health problems as the reason behind his decision.

As for McCready, he has already begun to hit the campaign trail hard, asking for donations on Twitter to fund his second run. In the Republican primary, Harris officially endorsed Stony Rushing, a Republican who has repeatedly mocked and denounced the fraud investigation in recent months on his own social media accounts, per New York Magazine.

In an "open letter" to Harris on his Facebook account in 2018, Rushing supported the Republican candidate and called the elections board "corrupt." He further accused the board of turning "a blind eye" to alleged wrongdoing in the Democratic party.

Harris' endorsement of Rushing in a Feb. 26 statement (as released by local reporter Joe Bruno) read in part,

[Stony's] background and his experience have proven him to stand firm on so many of the issues that concern us, including the issue of life, our national security, and religious freedom. I hope that those who have stood with me will strongly consider getting behind Stony Rushing.

In the meantime, two people have been arrested in the last two weeks in relation to the investigation into election fraud in the 9th District; five people in total have been indicted thus far, according to local news channel WNCT9.

According to election official Amber McReynolds in an op-ed for The Hill, there are a few specific ways in which districts like the 9th District open themselves up for fraudulent interference or other similar flaws: they have "burdensome witness requirements," meaning that the voter has to have two witnesses sign his or her ballot for it to be recognized; they don't have enough options for voters to drop off their ballots in person; they have virtually no tracking system for ballots; the instructions on the ballots are not as clear as they could be; and there aren't enough legal punishments put in place to deter voters from doing anything illegal with their ballot.

McReynolds added, "Election administration — from laws to conduct — must focus relentlessly on the protection of the right to vote, not merely on who wins the election."

Until the general election takes place in September, the 9th District will only be represented in D.C. by its senators, Richard Burr and Thom Tillis, both of whom are Republicans.