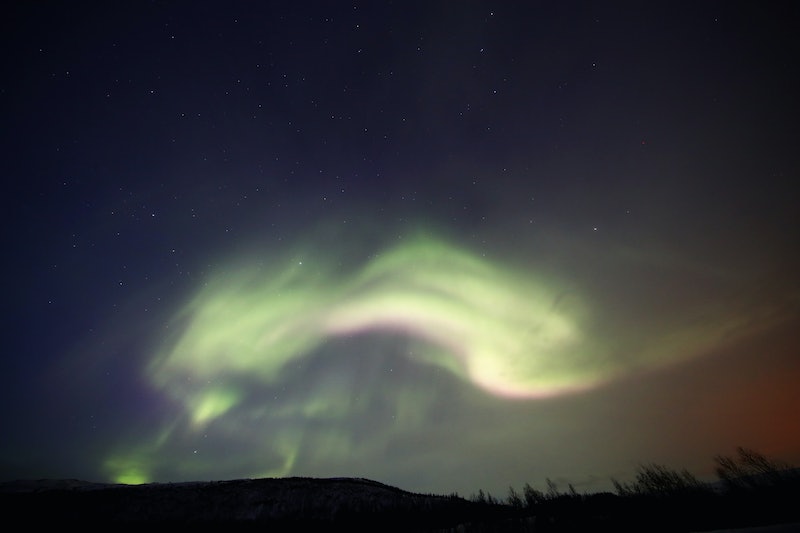 Good news for local Aurora chasers: the Northern Lights may be visible in much of the northern United States the night of Friday, June 1, thanks to a minor storm sweeping the uppermost regions of Maine, Michigan, Minnesota, Montana, North Dakota, and Wisconsin. If you happen to be in or near one of those areas at this very moment, GET THEE TO A FOREST, tout suite!

According to Thrillist, the States will be gifted with a glimpse of the Northern Lights thanks to a G1 geomagnetic storm (not to be confused with a geostorm, as I did on first read). Geomagnetic storms are basically solar storms, which temporarily disturb Earth's magnetic field. These storms can briefly screw up navigation and radio signals, but more importantly, solar storms cause solar flares, which can make the Northern Lights appear brighter. Normally, the lights are only visible close to the magnetic north pole, hence why people tend to see them in the northernmost parts of Alaska, northern Canada, Iceland, and northern Scandinavia. But brighter lights cast a bigger net, and the famed yellow, red, green, blue, and purple lights get to make their way down south, to us.

For those of you who've been reading me blather on about the Northern Lights but have no idea what I'm talking about, they are the Aurora borealis, i.e., a natural light display caused by the Earth's magnetic field. I did extremely poorly in science classes in my youth and much of this is deeply technical, but as I understand it, the lights are caused by solar wind escaping from sunspot regions on the sun's surface, which occur when the sun's temperature changes. The solar winds fly through space and are drawn to the Earth's magnetic poles, where they manifest as the aforementioned yellow, red, green, blue and purple lights (the colors are different thanks to the oxygen and nitrogen in the atmosphere).

The Northern Lights are a truly spectacular sight, and are so popular that both scientists and layperson enthusiasts tend to chase them around. The lights are seasonal: in Alaska, for instance, the Northern Lights are most visible near the Arctic Circle from September to late April, though they're at their strongest from December to March, when it's nearly dark daylong. You can also book special Northern Lights-watching "experiences" in popular locales, where guides will take you to the best Northern Lights viewing spots (although there's no guarantee you'll see them, which is a bummer when you're shelling out cash).

For Friday night's Northern Lights experience, a representative with the Space Weather Prediction Center says the lights will be most visible at around 2 a.m. Eastern Standard Time, and if you want to get a good look, your best bet is to find a dark area far from an urban center. "You need very clear skies, a good view of the northern horizon (no trees, buildings, or hills), and it needs to be dark," a representative told Thrillist.

This is the second geomagnetic storm in the area in a month — one weekend in early May, the Independent reported the lights could be visible in Maine, Michigan, Minnesota, Montana, North Dakota, and Wisconsin, though it's not clear if they did indeed end up being visible. That same area, with New York included, got a look at the Northern Lights in November, according to Newsweek.

It's also noteworthy, as Thrillist reports, that this is the best time to see the lights, because in the next eight years, the sun's cycle will weaken the lights and make it more difficult to see them far south of the magnetic pole. They'll be back, though — the sun's next solar maximum will be here in 2025.