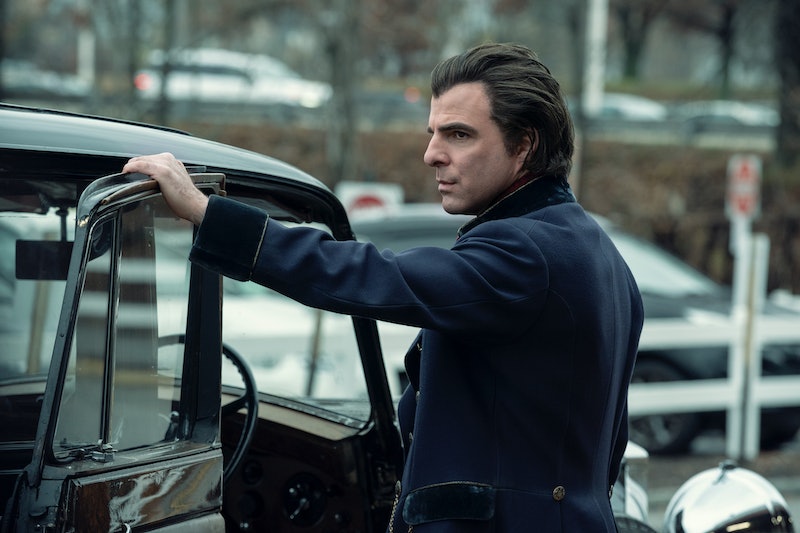 Zachary Quinto may be bringing the character of Charlie Manx to life in AMC's NOS4A2, but his story existed long before it hit the small screen. Not only that, but it was dreamt up by someone whose family knows a thing or two about the horror genre. The NOS4A2 book the series is based on was written by Joe Hill, son of horror mastermind Stephen King, and it will completely change the way you think about vampires. At least that's what series creator Jami O'Brien is hoping for.

"It's kind of a fun twist on the vampire genre. Charlie Manx is a kind of vampire but he's not any kind of vampire that we've seen before," O'Brien told reporters during this year's Television Critics Association press tour, per The Wrap. "He doesn't suck blood, he sucks souls. It's a little irreverent and I'm glad that we have it because I think it's a lot of fun."

So if you were hoping to witness some bloodlust or see a vampire's skin glitter in the sun, NOS4A2 will be a disappointment in that regard. Still, it's worth watching this new take on such a well-known supernatural creature.

The story centers around Manx's character, who is described as a seductive immortal who feeds off the souls of children. Once he's done, he then deposits whatever is left of the children in a secret location he calls Christmasland — a twisted Christmas village of Manx's imagination where every day is Christmas and unhappiness is against the law. So apparently this show may also change the way you think about Christmas from here on out.

Diehard vampire fans may have already made the connection that the title of the series, when said out loud, sounds a lot like Nosferatu, which is the title of the classic 1922 silent film about a vampire called Count Orlok. So yes, there are some definite parallels between vampires and the kind of being Charles Manx has become over the years. But whatever you want to define him as, one thing's for sure — he's dangerous.

Speaking of the title, "NOS4A2" is also the license plate on Manx's 1938 Rolls-Royce Wraith, which is the case in Hill's book as well, though the source material dives a bit deeper into the meaning behind it than the series will, at least for now. "Manx talks about it deeper in the book than where we get in the first season, but it's a joke. And it's also a puzzle," O'Brien explained during the same TCA panel, also per The Wrap. "Both of those things speak to the humor of the book and the humor of the character."

Well, as much humor as you can expect from a story about someone who sucks the souls out of children, anyway. (What are the odds this guy knows the Sanderson sisters?) Either way, be prepared to sink your teeth (pun intended) into a new type of vampire that'll only make you thirsty for more.