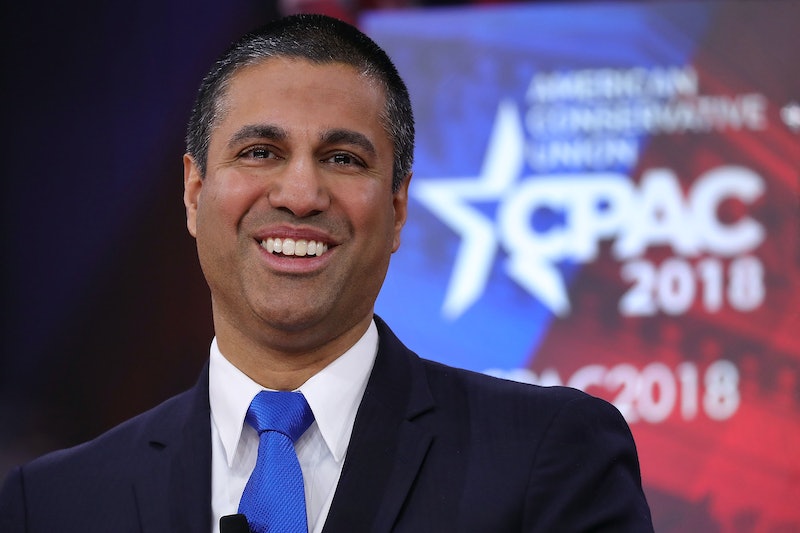 Less than two weeks after a mass shooting at Marjory Stoneman Douglas High School in Parkland, Florida took the lives of 17 students and teachers, the National Rifle Association (NRA) gave a rifle to the Federal Communications Commission (FCC) chairman. The NRA was honoring Ajit Pai for his role in repealing net neutrality laws, which barred internet service providers from manipulating download speeds or access to certain content.

Pai accepted the "Charlton Heston Courage Under Fire Award," named for the late actor who was once president of the NRA, at the Conservative Political Action Conference (CPAC) on Friday. A spokesperson for the NRA, Carolyn Meadows, said the award recognizes those who have “stood up under pressure with grace and dignity and principled discipline," according to CNN.

At CPAC, Pai once again defended his aggressive campaign to ditch net neutrality regulations, which the Obama administration put in place in 2014. "Some people urged me to go for sacrifice bunts and singles and try to nibble around the edges — make some minor changes," Pai said. "But I don't play small ball."

The FCC chairman was given a Kentucky long rifle that will be put on display at the NRA's museum in Fairfax, Virginia. Unlike ceremonies in the past, the organization wasn't actually allowed to bring the weapon on stage, Meadows, the NRA spokeswoman, told Reuters.

While Pai's decision was popular with the NRA, a majority of Americans were against repealing net neutrality. An overwhelming 83 percent of Americans, including 75 percent of Republicans, 89 percent of Democrats, and 86 percent of Independents, wanted to keep the open internet rules.

A lot of people have had strong reactions to the NRA honoring Pai for his role in ending free access to the internet. "Courage under fire is what that football coach who ran into a school shooting and died saving his students' lives did," ThinkProgress' Ian Millhiser tweeted. "Ajit Pai sits in a comfortable office and signs off on memos." The former director of the Office of Government Ethics, Walter Shaub, also took issue with the NRA gifting something to a government official.

Democratic congressman Ted Lieu also questioned the ethics of this type of gift, and called the NRA "out of touch" with Americans. "Just when you thought @NRA could not be more out of touch with the overwhelming majority of Americans, it turns out the NRA randomly supports repealing net neutrality," Lieu tweeted. "What's next, is the NRA going to support repealing seat belts?"

In addition to the NRA, those happy about the decision to get rid of net neutrality laws include internet providers like AT&T and Verizon. They now have the ability to control the download speeds of certain content, and prioritize particular platforms over others. In certain countries that don't have net neutrality laws, consumers have to pay for access to things like social media.

Some companies, like Facebook and Alphabet, Inc., which owns Google, have spoken out against the repeal of net neutrality and are supporting a congressional bid to put the rules back in place. Last week, 23 state attorneys general sued the FCC to preserve the regulations.

Also in the wake of the Parkland, Florida massacre, many companies have severed ties with the NRA, as the pro-gun organization has launched a counter-campaign against the #NeverAgain movement, led by the teenage survivors of the mass shooting.

Activist groups against the repeal of net neutrality, like Fight for the Future, have expressed disagreement with the NRA's decision to honor Pai. In a tweet, Fight for the Future wrote that the gun lobbying group was awarding the FCC chairman for essentially allowing "Internet service providers (ISPs) to censor websites and information about guns."

More like this
LGBT+ Men Fleeing Afghanistan Were Denied Asylum By The Home Office, New Findings Show
By Sam Ramsden
Celebrities & President Biden Are Enraged By The Leaked Roe v. Wade Decision
By Alyssa Lapid
23 Abortion Funds In States With Trigger Bans To Donate To
By Emma Carey
10 Times Boris Johnson Got It Wrong On Trans Rights
By El Hunt and Sam Ramsden
Get Even More From Bustle — Sign Up For The Newsletter