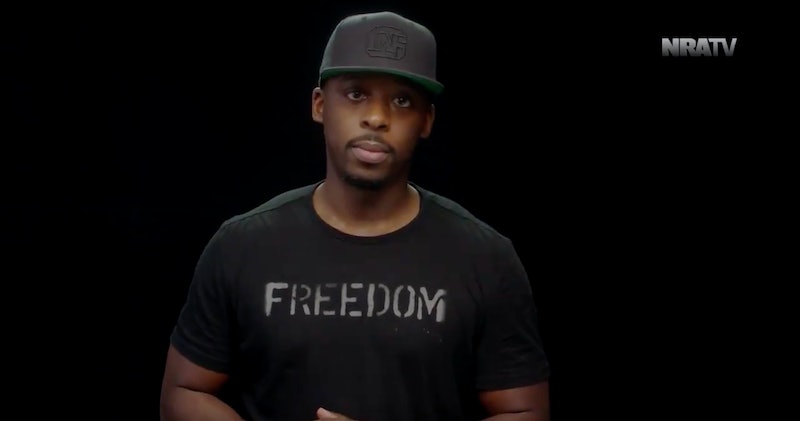 In an odd turn of events, the NRA wants Congress to censor school shooting news coverage, a Vice article reports. In addition to past solutions it's suggested, like arming teachers with guns or increasing security at school, this measure stands to affect media outlet's first amendment rights in a major way.

"It's time to put an end to this glorification of carnage in pursuit of ratings, because it's killing our kids," Colion Noir, a gun rights activist, said in an episode of NRA-TV, which he hosts. The video was posted online a little under one week after the recent school shooting Santa Fe, Texas, where 10 were killed. "It's time for Congress to step up and pass legislation putting common sense limitation on #MSM's [Mainstream Media] ability to report on these school shootings."

This isn't the first time that the NRA has accused the media of playing into the hysteria of mass shootings. At a CNN Town Hall after the Parkland high school shooting, NRA spokesperson Dana Loesch spoke out about it.

"The problem that we got is we are trying like the dickens to treat the symptom without treating the disease. The disease in the case isn't the Second Amendment. The disease is youngsters who are steeped in a culture of violence." North said on Fox News Sunday. "They have been drugged in many cases. Nearly all of these perpetrators are male, and they are young teenagers in most cases. And they've come through a culture where violence is commonplace. All we need to do is turn on a TV, go to a movie."

The American Psychological Association presented research two years ago at an annual convention by Western New Mexico University connecting the three-fold increase in mass shootings from 2000 to 2016 to what it's calling a "media contagion effect." This effect is when a mass shooting is covered extensively, with much of the attention put on the shooter.

Dave Cullen, the author of Columbine, a book about the infamous 1999 school shooting, talked to CNN's Brian Stelter after the Parkland shooting and explained that possible school shooters, like terrorists, may try to carry out a violent act to get media attention. Cullen also suggested that media companies try not to home in on the shooter to avoid giving them any "star power." That's not to say the role of gun culture in America can be definitively ruled out as a contributor to gun violence though.

In an article for Vox, journalist German Lopez presents some sound facts that speak volumes to the country's gun violence problem. For example, the United States has the highest number of privately owned guns in the world in addition to having had more gun deaths than other developed nation. Whereas the blame is often put on a shooter's mental state, that's oftentimes not accurate. In fact, individuals with mental illnesses are more likely to be victims, another Vox article says.

In the NRA-TV spot, Noir flips gun-control advocates' language by proposing "common sense limitations" on how the media covers mass shootings and implies that the left-wing is being hypocritical in trying to suppress the right-wing's Second Amendment rights while freely exercising their First Amendment right.

"As much as the media loves to pivot the conversation after a mass school shooting to gun control, the pen is mightier than the sword," he said. "I vehemently disagree with the government infringing on First Amendment rights, the same way I believe the government shouldn't infringe on Second Amendment rights." Whether Congress will ever consider censoring media coverage of school shootings remains to be seen. But you can bet there will be an uproar if it does.