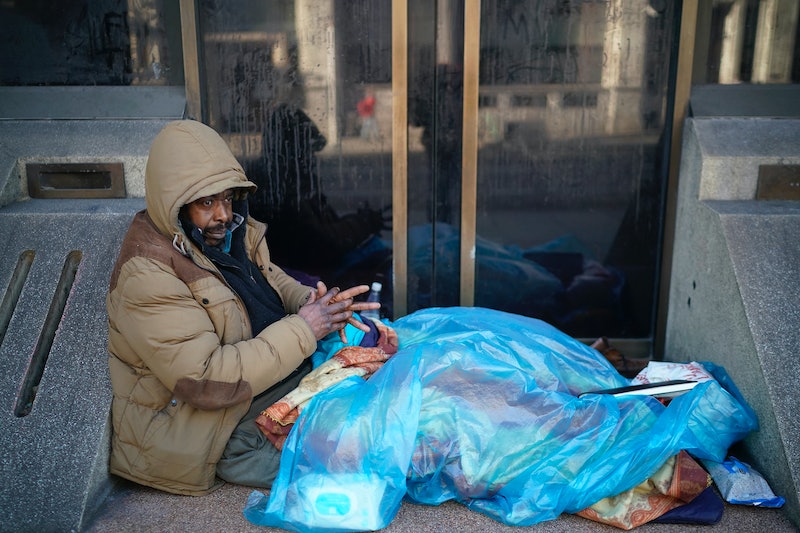 A recent report by the U.S. Department of Housing and Urban Development (HUD) revealed that the number of homeless Americans in 2018 has increased slightly since the year before. Specifically, the number of individuals experiencing homelessness on a given night in January was estimated to be around 553,000 this year, which reflected a .3 percent increase from 2017. What's more, this minor rise marked the second year in a row that the number has gone up.

In a statement regarding the report, the Trump administration described the current number of homeless people to be "largely unchanged." It further pointed out that the number of homeless veterans, specifically, had decreased 5.4 percent since 2017, and that the quantity of homeless families with children had also decreased 2.7 percent since 2017. However, the number of "chronic" homeless people, meaning those who were homeless for a long term period of time, increased 2.2 percent in the same time frame.

Each year, the HUD report is based off of the annual collection of data from around 3,000 cities and counties across the United States on one night in January, in which agencies called "Continuums of Care" work to identify the homeless amount based off of emergency shelters, transitional housing programs, and "unsheltered settings."

Via NBC, Mel Martinez, the former HUD secretary for the George W. Bush administration, said that the increase in homelessness over the last two years is largely due to shortages in affordable housing. He said, “More and more communities are addressing the problems that cause homelessness, but we are losing the battle because of affordability."

Similarly, Ben Carson, the current HUD secretary, said in the administration's official statement, “Our state and local partners are increasingly focused on finding lasting solutions to homelessness even as they struggle against the headwinds of rising rents."

Per The New York Times, it's worth noting that the HUD report has limitations, given its scope; for example, a number of communities in San Francisco (which is known for a high homeless population) did not participate in the January homelessness count, the publication reports. It's also worth noting that homelessness actually dropped by 4.7 percent in Los Angeles, a county that the New York Times reports has had a historically vast homeless population, and has made massive efforts in recent years to tackle the problem.

Other locations in the country have seen the opposite take place, in recent years: in New York, for example, the homeless population increased by 39 percent in 2017, according to the New York Daily News. Similarly, The Boston Globe reports that homelessness in Boston has increased 14 percent in the last year, and 38 percent in the last decade, largely due to housing shortages.

The New York Times reports that in a conference call to reporters on Monday, Carson didn't provide a definitive answer when he was asked if the administration would provide additional funding to programs that tackle the housing problem. He said in part, “Budgeting obviously needs to take into account the fact that there are limited dollars...But this is a significant problem.”