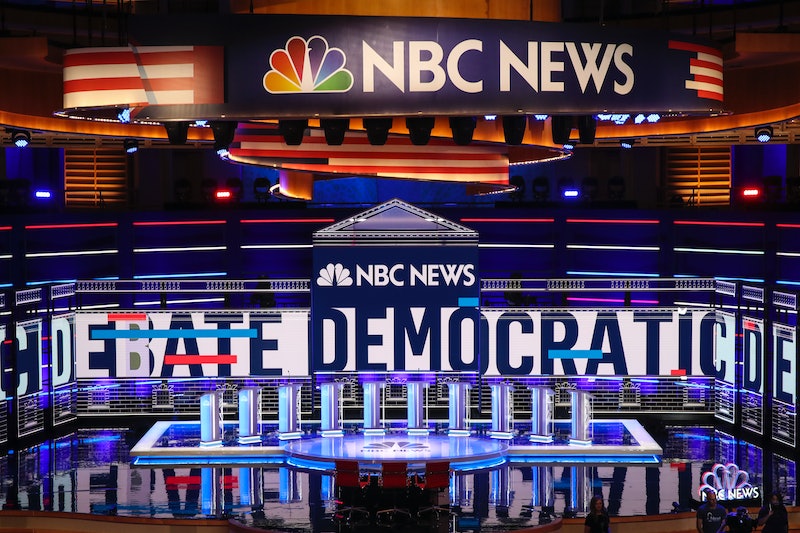 It's a significant milestone when it comes to representation and diversity in the political arena. The number of women on the Democratic debate stage this week is historic, Vox reported on Wednesday. For the first time in America's history, more than one woman will be part of a presidential debate.

You can expect to see Massachusetts Sen. Elizabeth Warren, Minnesota Sen. Amy Klobuchar, and Hawaii Rep. Tulsi Gabbard on Wednesday night, according to The New York Times. On Thursday night, California Sen. Kamala Harris, New York Sen. Kirsten Gillibrand, and author Marianne Williamson (who has been described as a "wellness guru" by Refinery29) will take their ideas to stage and debate each other.

For a long time, advocates have argued that more women presidential candidates on the debate stage encourages and normalizes the idea of a woman president for the people watching. In an op-ed for NBC News, Barbara Lee, the president of the Barbara Lee Foundation — an advocacy group for women's equality and representation in U.S. politics — wrote, "Research has shown that critical mass makes a difference in being taken seriously: Two or more women or minority candidates have a better shot at getting hired than one alone."

Although there will be more than one woman on the debate stage on both nights, men still outweigh Democratic women presidential candidates by number. For every three women debating each night, seven male presidential hopefuls will join them. Naturally, the gender dynamics of the debates is a topic brought up by activists and advocates.

In comments to Fortune magazine, the top official with the progressive advocacy organization, MoveOn, Karine Jean-Pierre, said that women candidates have to grapple with their image arguably more than their male peers.

"Women need to both show strength and be likable. They also need to sell their credentials more than men. All of that puts them at a disadvantage," Jean Pierre said to the publication. "That being said, we know women voters will be key to this election."

Communications strategists are also talking about the significance of seeing more than one woman on the debate stage this week. The former deputy communications director for Hillary Clinton, Christine Reynolds, told Fortune, "My hope is the more we see multiple women up on that stage and a more diverse set of candidates, that we start expanding our view of what is acceptable from a candidate, how they’re supposed to look, how they’re supposed to sound."

To be clear, women aspiring to be elected to the Oval Office have stepped on the debate stage in America before. In previous examples, as Vox pointed out, Democratic women like Shirley Chisholm, Carol Moseley Braun, and Hillary Clinton along with Republican women like Carly Fiorina and Michelle Bachmann have indeed stepped into the debate spotlight. But they didn't have other women on stage.

The milestone has piqued people's curiosity. Kelly Winfrey, who works with the Carrie Chapman Catt Center for Women in Politics, told WHOTV, "The gender dynamics will be something that we haven’t got to see before because it’s not just one candidate.

"You know, we’ve had Hillary Clinton or Michele Bachmann, but we haven't had multiple female candidates," Winfrey added. "So I’ll be curious how gender plays into how they interact with each other, issues they talk about, how they talk about those issues."