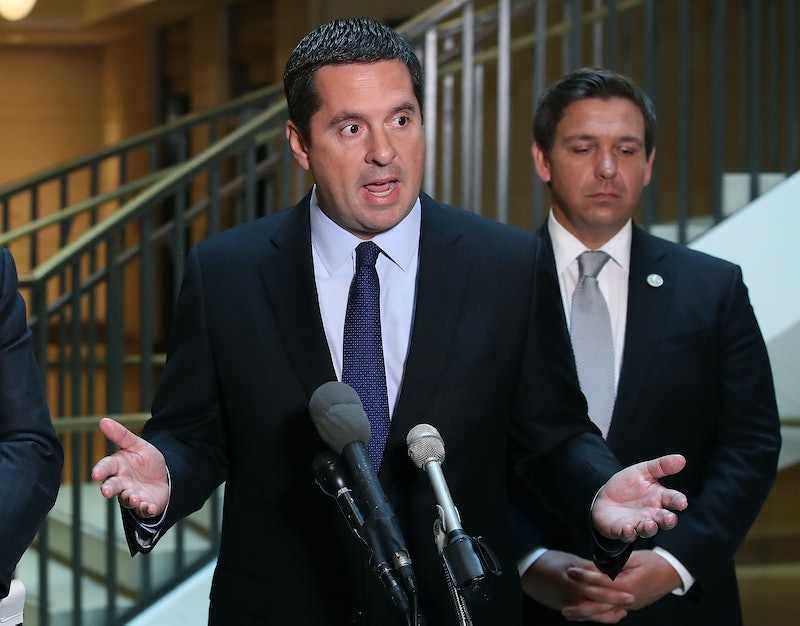 A highly anticipated congressional memo accusing the FBI of abusing its surveillance tools was released on Friday, despite the concerns of top national security officials. Donald Trump approved the release of the memo, with none of its content redacted, even after FBI Director Christopher Wray urged him to rethink his decision. He has described the memo as a "disgrace."

You can read it here.

The controversial four-page memo was written by California Rep. Devin Nunes — who chairs the House Intelligence Committee — and his Republican staffers. It alleges that in obtaining a surveillance warrant for the Russia investigation, the FBI at least partially relied on a dossier of allegations against Trump sponsored by Hillary Clinton's presidential campaign and the Democratic National Committee.

The surveillance warrant was requested in October 2016, and gave FBI and Justice Department officials the authority to spy on former Trump campaign adviser Carter Page. The memo argues, given the nature of the dossier, that the early days of special counsel Robert Mueller's investigation into Russian interference during the 2016 election were rooted in political bias. Last January, shortly before Trump's inauguration, BuzzFeed published the 35-page dossier, which was compiled by former British intelligence agent Christopher Steele.

According to The New York Times, the White House confirmed that Trump read the memo prior to authorizing its release, and the president reportedly believes what the document says. In fact, in the early hours of Friday morning, just hours before the memo was released, Trump sent out a tweet accusing the FBI and the Justice Department of favoring Democrats over Republicans in the course of the investigation.

Although Trump and his supporters played up the document's significance prior to its public release, Axios reported that White House insiders were skeptical about the impact the document would actually have. They were concerned that it would be underwhelming, with the most worrisome result being Wray's potential resignation. Wray has not threatened to quit — yet, at least — but he did make it clear the document was being published against his advice. The FBI shared his concerns; in a rare public statement on Wednesday, the agency mentioned that it had been able to review the memo prior to its release.

“As expressed during our initial review, we have grave concerns about material omissions of fact that fundamentally impact the memo’s accuracy," the FBI said.

California Rep. Adam Schiff, Nunes' colleague and the top Democrat on the House Intelligence Committee, was staunchly opposed to the memo's release, which he perceived as an attack on federal law enforcement agencies. On Wednesday evening, Schiff alleged on Twitter that Nunes had made "material changes" to the memo he sent to the White House that the House Intelligence Committee had not approved.

“It’s clear from the president that this is exactly the purpose behind this cherry-picking of information that Nunes wants to release," Schiff told CBS on Friday, shortly before the document was released. "This is designed to impugn the credibility of the FBI, to undermine the investigation.”

House Speaker Paul Ryan, however, suggested to reporters on Thursday that the memo would not have such an effect, whatever its intention.

"This memo is not an indictment of the FBI, of the Department of Justice," Ryan told reporters in West Virginia while on a GOP retreat. "It does not impugn the Mueller investigation or the deputy attorney general."

Nonetheless, Schiff and other Democrats have written a 10-page rebuttal memo — which "sets out the proper context," according to Schiff — that they are now pushing to release publicly alongside the Nunes memo. They were not successful in calling for the documents' simultaneous publication — as the Nunes memo has already been publicly released — but the House Intelligence Committee voted on Monday to release the Democrats' memo to members of the House, CBS News reported.

In addition to writing their own memo, top Democrats have also called on Ryan to revoke Nunes' chairmanship of the Intelligence Committee, but Ryan dismissed these demands as "playing politics." On Friday, however, a spokeswoman for Ryan told The Hill that the speaker supported releasing the Democrats' counter-memo.