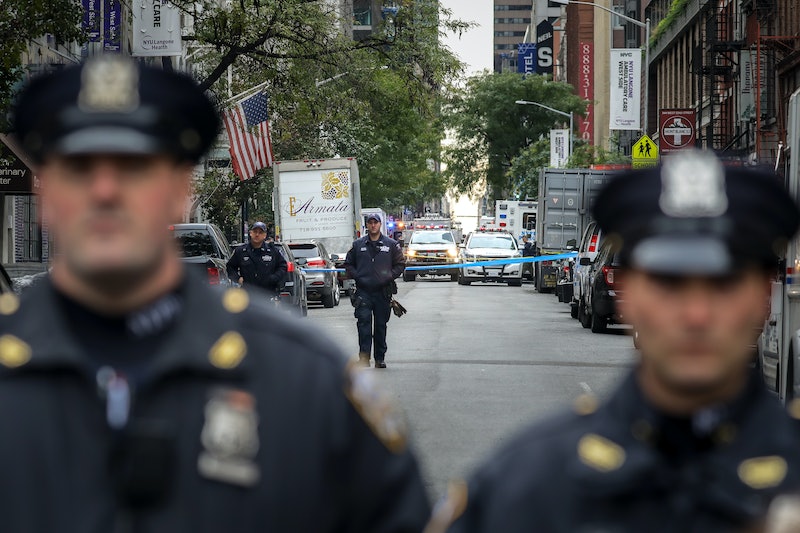 According to a lawsuit filed in federal court Thursday, the NYPD handcuffed a woman while she was giving birth, and violated state law by refusing to remove her shackles as she went into labor. The NYPD declined Bustle's request to comment, but referred to a statement from the New York Law Department.

"We are examining these allegations very carefully," the Law Department said. "We will have no further comment before all the facts are in."

The alleged incident happened in February at Montefiore Medical Center, according to the New York Times. The doctors told the police officers in question that restraining a pregnant woman is both extremely dangerous and illegal under New York state law, the woman alleges in her lawsuit; however, the officers responded that their Patrol Guide supersedes the law and required them to handcuff her, according to the lawsuit.

"Against the vehement protests of medical staff, the NYPD refused to remove the shackles, compelling Ms. Doe to labor in excruciating pain and forcing doctors to examine Ms. Doe with her feet and hands bound," the lawsuit alleges, according to ABC News.

The woman, who asked to remain anonymous and is identified as Jane Doe in the lawsuit, says that officers eventually removed some but not all of the restraints during her hour-long labor, and that she was still handcuffed to the hospital bed when she finally gave birth. According to the lawsuit, Doe "experienced heavy bleeding" after giving birth.

The woman says that the experience traumatized and humiliated her, and is seeking damages and changes to the NYPD's policy to ensure that the department doesn't shackle any more pregnant women in custody. The lawsuit directly names five NYPD officers, according to ABC News.

A 2009 state law prohibits officers from shackling women during pregnancy, deliver or the eight week postpartum period after birth. But the lawsuit alleges that the officers knowingly defied this law, and according to the Times, notes from a doctor who was present at the time confirm this.

The officers told the doctor that "the NYPD Patrol Guide supersedes this law and that patient would need to remain restrained during remainder of hospitalization," according to the hospital notes.

As a matter of fact, the NYPD Patrol Guide does not supersede state law. It does require officers to handcuff or otherwise restrain arestees who need medical attention — but it also allows officers to remove said restraints if a doctor requests it and a patrol supervisor gives permission.

Although shackling pregnant women is illegal under New York law, a 2015 study by the Correctional Association of New York identified 23 women who said they were shackled by New York authorities while pregnant after the law took effect.