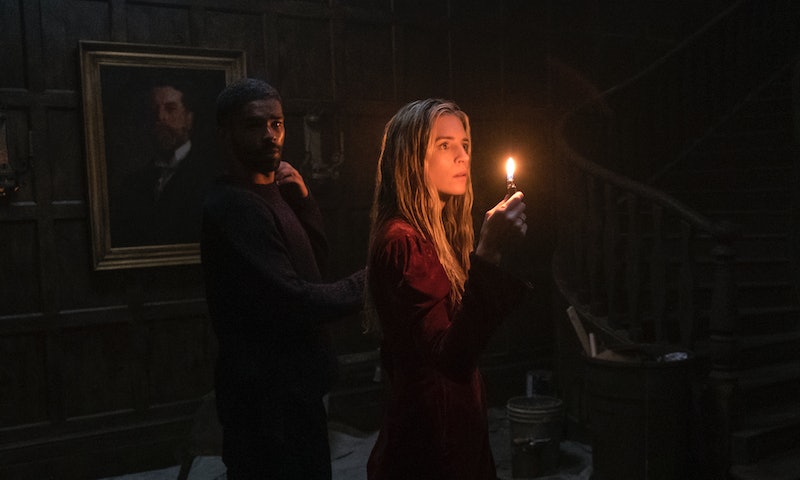 It's been over two years since the first season of The OA hit Netflix and sent our minds reeling into overdrive. But if you thought that storyline was confusing, that's nothing compared to what the second installment has in store. The first trailer for The OA Season 2, which is slated to hit the streaming platform on Friday, March 22, is full of the all the supernatural elements you came to love about Part I, but with an exciting new twist added to the mix.

Played by Brit Marling, Prairie Johnson wakes up in the hospital at the beginning of the trailer, only to realize that she successfully transported her consciousness into an alternate-universe. She still looks like herself, but has a completely different (and very lavish) life as a Russian heiress, which includes a super fancy apartment in San Francisco. But if the first season of The OA taught us anything, it's that nothing can ever be as good as it seems, which becomes evident in the trailer. Prairie may have escaped the horrors of her former life, but her troubles are still far from over. Plus, it seems that this new dimension is one where Barack Obama was never president, which is upsetting in and of itself.

According to the official press release obtained by Bustle, the synopsis of The OA Part II reads as follows:

"The “mind-bending” story returns with The OA Part II, which follows OA as she navigates a new dimension, one in which she had a completely different life as a Russian heiress, and one in which she once again finds herself as Hap’s captive. Part II introduces Karim Washington, a private detective tasked with finding a missing teen, Michelle Vu. His path crosses with OA, as they try to solve the mystery of Michelle’s whereabouts and a house on Nob Hill connected to the disappearance of several teenagers. Meanwhile, back in the first dimension, BBA, Angie and the boys find themselves on a journey to understand the truth behind OA’s story and the incredible realities she described."

Considering that this is a completely different dimension, it's interesting that Prairie will ultimately still find herself in the clutches of the villainous Hap. Though hopefully she will be able to best him once again and escape.

For her part, though, Marling was eager to return to the role of Prairie and dive headfirst into Part II's unique storyline. “It was really delicious to dive back into a realm you had been intimate with and land in the body of someone who had not been through all the experiences we watch Prairie go through in Part I,” she told Entertainment Weekly during a recent interview, while her collaborator, Zal Batmanglij, who co-created the series, added:

“We think of Part II as very much a noir. We wanted to come in through the character of a cynical detective. Films like The Big Sleep didn’t seem antiquated [when they came out]. They were very modern. That’s why we thought, ‘What better place than San Francisco and the tech world to set a noir today?’”

There's no doubt that Prairie's latest journey will be an interesting one, but it'll also be just as confusing as ever, so prepare yourselves accordingly and let the wild speculations begin!

More like this
Nicola Coughlan Shared A Lady Whistledown Excerpt From ‘Bridgerton’ Season 3
By Grace Wehniainen, Alyssa Lapid and Sam Ramsden
'The Rings Of Power' Episode 4 May Put A Face To Season 1’s New Villain
By Kadin Burnett
Netflix Reveals First Look At Wednesday In The 'Addams Family' Spinoff Series
By Bustle Editors
The New Bachelor Will Be Announced Next Week & Here Are The Top Contenders
By Grace Wehniainen
Get Even More From Bustle — Sign Up For The Newsletter