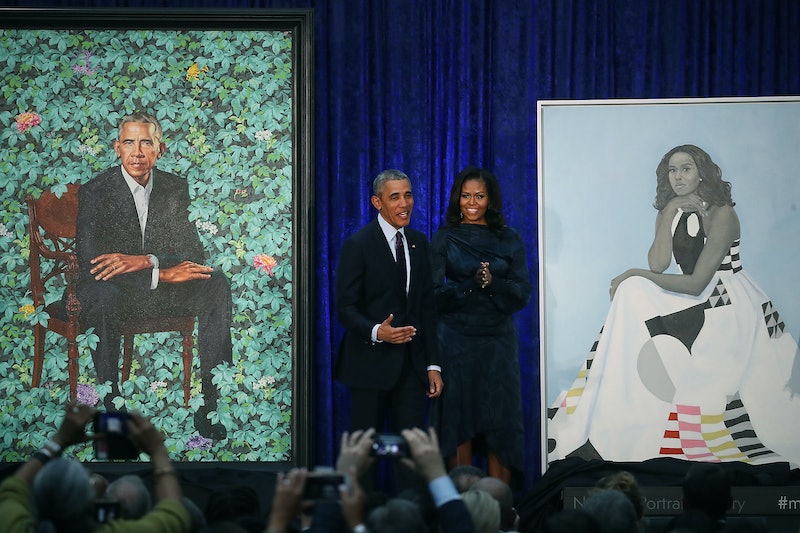 Two particular pieces of art in the capital has been drawing massive crowds. On Tuesday, The Washington Post reported that the Obama portraits at the Smithsonian National Portrait Gallery had attracted "millions of visitors," breaking a record in attendance for the museum.

The individual portraits of former president Barack Obama and first lady Michelle Obama were unveiled in the Smithsonian gallery on Feb. 12, 2018. Since then, according to The Post, the venue has attracted a record-breaking 2.3 million visitors. That is nearly a million more visitors since 2017.

A New Yorker named Justin Philip told The Post about his visit the National Portrait Gallery: "It’s the only reason I’m here. [Obama] was the first president I ever cared about."

Obama's portrait was painted by Kehinde Wiley, and Michelle's by Amy Sherald. The former president's portrait hangs in "America's Presidents" gallery at the Smithsonian, along with 43 other former presidents'. Michelle's painting is on the third floor of the building, close to portraits of singer Beyoncé and writer Toni Morrison.

National Portrait Gallery volunteer Mary Francis Koerner told The Post about the effect the Obama portraits had on the public. "They have brought in so many people," Francis Koerner said. The volunteer added that "there’s an uptick of the younger generation and that’s who they come to see."

In Wiley's portrait of Obama, the former president can be seen casually leaning forward in a chair, surrounded by lush greenery. The artist told The New Yorker in October 2018 about depicting Obama in such a colorful setting. "When you look at the background, you’ll see that there are flowers from Indonesia, flowers from Kenya, Hawaii, the state flower of Chicago," Wiley said. "And it all kind of gives you a sense of space and place and [Obama's] trajectory."

As for Michelle's portrait, Sherald painted the former first lady in a black and white gown with geometric and multi-colored shapes on its fabric. With a pale blue background behind her, Michelle can be seen sitting, presumably cross-legged, with one hand under her chin, and her other arm slung over her knee. One visitor, Kamilah Chambers, at the National Portrait Gallery told The Post, "She looks regal, and yet soft."

The artist behind Michelle's portrait seems to have a bond with her. At the unveiling of the Obamas' portraits in February 2018, Elle reported that Michelle said of Sherald, "There was an instant connection, a kind of sister-girl connection."

Many parents brought their own children to observe the paintings, according to The Post. Tershia Ellis of New York told the newspaper that she brought her two kids with her to look at Obama and Michelle's paintings.

One of Ellis' children, Zaryus, told The Post why he loved Obama's portrait. "He’s the first black president," he said while pointing out the flora surrounding him in the painting and how, he noted, it was "amazing because of the all of the flowers representing the places he’s from."

Similarly, in 2018, CNN reported on the viral photo of the then-2-year-old Parker Curry, who appeared to be deeply in love with Michelle's portrait.

With the Obamas remaining a popular former first couple, their famous portraits will likely continue to draw large crowds to the Smithsonian National Portrait Gallery.